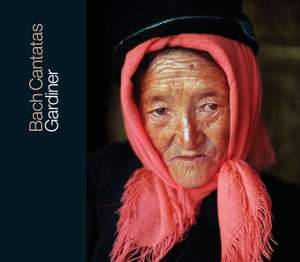 Best known among this clutch of cantatas is the solo alto 'Vergnügte Ruh'. Michael Chance turns in a fervent performance, tonally pure and full of expressive nuance. Praise, too, to Susanne... — BBC Music Magazine, September 2009, 5 out of 5 stars More…

John Eliot Gardiner, The Monteverdi Choir and The English Baroque Soloists continue on their Bach pilgrimage and head to Ansbach to perform at the prestigious Ansbach Bach Festival. The programme opens with BWV 9 Es ist das Heil uns kommen her. This is then followed by the well known chamber cantata BWV 170 Vergnügte Ruh, beliebte Seelenlust, expertly sung by internationally renowned counter-tenor, Michael Chance. A highlight is the first alto aria - an aria of pure enchantment, which tells, through rich and passionate music, that “pleasant rest” can be attained only though union with heaven. The programme ends with the very moving funeral motet Der Gerechte kommt um, attributed to Bach, an incredibly beautiful five-voiced Latin motet composed by Johann Kuhnau. The magnificence of this motet made this very popular with both the choir and orchestra thereby resulting in it being used as a regular encore on the Bach Cantata pilgrimage.

Thirty miles east from the hustle and bustle of a busy Edinburgh hosting its world famous festival, we join John Eliot and the Monteverdi forces in the collegiate church of St. Mary’s situated in the modest, tranquil market town of Haddington, Scotland. BWV 186 Ärgre dich, o Seele, nicht, comprises eleven movements and is structured in two parts. A movement that stands out is the glorious duet for soprano and alto (No.10), in which the crucial injunction ‘Sei, seele, getreu!’ (‘O soul, be true!’) is reserved until the last two bars. We then hear BWV 107 Was willst du dich betrüben, a chorale cantata set per omnes versus, that is, with all the verses of a hymn set unaltered. Bach here cleverly overcomes the limitations of being confined to a rigidly structured hymn without monotony or repetitiveness through the usual devices of changing the voice type in the arias, the key and the metre. The final chorale, BWV 187 Es wartet alles auf dich is again structured in two parts and comprises of music that is both gentle and seductively beautiful. Bach clearly supports this belief by parodying the music of this cantata a decade later in his G minor Missa (BWV 235).

Best known among this clutch of cantatas is the solo alto 'Vergnügte Ruh'. Michael Chance turns in a fervent performance, tonally pure and full of expressive nuance. Praise, too, to Susanne Regel for her sensitive oboe d'amore playing.

Given two separate quartets of soloists, and different configurations of Gardiner’s elite choir and period-instrument band, the results are remarkably consistent, thanks to the force of the conductor’s single-minded personality, unrepentant in his preference for medium-scale Bach...collectors of the series won’t be disappointed.