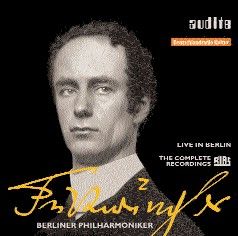 It is quite something to follow the trajectory of such an interpretive genius. — BBC Music Magazine, June 2013

The production presents the complete RIAS recordings with Wilhelm Furtwängler from 1947 to 1954 and is accompanied by a complimentary CD with previously unreleased live recordings of Furtwängler speaking about music interpretation. The majority of the concerts given by Wilhelm Furtwängler and the Berlin Philharmonic between 1947 and 1954 were recorded by the RIAS Berlin; all of these recordings are documented in this boxed set. The original tapes from the RIAS archives have been made available for the first time for this edition so these CDs also offer unsurpassed technical quality. Furthermore, some of the recordings are presented for the very first time, such as the Fortner Violin Concerto with Gerhard Taschner. These RIAS recordings are documents of historical value: they contain a major part of Furtwängler's late oeuvre as a conductor, which was characterised by a high level of focus in different respects. Focus on repertoire which has at its core the symphonic works of Beethoven, Brahms and Bruckner and is supplemented by works by Bach and Handel and also by topical composers of the time, including Hindemith, Blacher and Fortner: artists who were counted amongst the members of "moderate modernism" and who were not perceived to have been tainted by the cultural politics of the National Socialists. Focus was also a guiding principle in Furtwängler's concert programmes which always feature a particular idea. His interpretations also demonstrate extremely high levels of focus: concentration and focus for him meant a contemporary decoding, a re-creation, which would express the fundamental content of a work. A number of works - the Third, Fifth and Sixth Symphonies by Ludwig van Beethoven as well as Johannes Brahms' Third Symphony - are included in two interpretations.They reveal how Furtwängler was able to accentuate different aspects of a work whilst maintaining the same, clear basic conception - and how the actual interpretation depended on the context of the particular programme. The production is part of our series 'Legendary Recordings' and bears the sticker '1st Master Release'.This term stands for the excellent quality of archival productions at audite. All historical publications at audite are based, without exception, on original tapes from broadcasting archives. In general these are the original analogue tapes, which attain an astonishingly high quality, even measured by today's standards, with their tape speed of up to 76 cm/sec.The remastering - professionally competent and sensitively applied - also uncovers previously hidden details of the interpretations.Thus, a sound of superior quality results. CD publications based on private recordings from broadcasts or old shellac records cannot be compared with these.

It is quite something to follow the trajectory of such an interpretive genius.