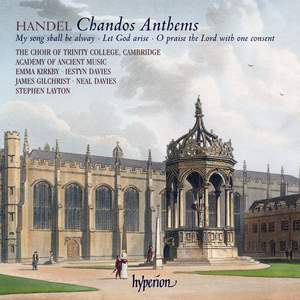 Layton never over-inflates the music but rather invigorates it through carefully detonated points of detail: the explosive choral entry which cuts the polite bluster introducing 'Let God Arise'... — BBC Music Magazine, June 2009, 4 out of 5 stars More…

I. O praise the Lord with one consent

II. Praise him, all ye that in his house

III. For this our truest int'rest is

IV. That God is great

IV. Let the righteous be glad

VI. Praised be the Lord!

VII. At thy rebuke, O God

II. My song shall be alway

III. For who is he among the clouds

IV. God is very greatly to be feared

V. The heav'ns are thine

VII. Blessed is the people

VIII. Thou art the glory

In a year of Handel celebration and many new recordings, this is a welcome addition to the discography. Stephen Layton, the Academy of Ancient Music, the Choir of Trinity College, Cambridge, and a stellar group of soloists—in fact, the best in solo Handel singing that this country has to offer—present a disc of three of the Chandos anthems which is sure to achieve the same critical and public acclaim as the recent Dettingen Te Deum from Trinity.

Here we have the composer at his most English and most gently appealing. Written for the musical establishment of the first Duke of Chandos, these anthems set texts taken from the Psalms, mainly the old version of the Psalter as preserved in the Book of Common Prayer, but also the metrical versions of Nahum Tate and Nicholas Brady, first published in 1696. The anthems have no direct models in English church music, but follow the form used by Handel for his Latin psalm settings, with a mixture of movements for solo voices and choruses. The expressive range of the solos is remarkable, and in the choruses Handel seizes every opportunity to create grand effects with modest means.

Layton never over-inflates the music but rather invigorates it through carefully detonated points of detail: the explosive choral entry which cuts the polite bluster introducing 'Let God Arise' is a good example.

Here are three of the 11 so-called ChandosAnthems composed for James Brydges, the Earl of Carnarvon (from 1719 the First Duke of Chandos). Handel's music was tailor-made for fewer performers than those featured here. Nevertheless, the 40 members of the Choir of Trinity College, Cambridge, sing with flexibility and lightness. The opening chorus of O praise theLord with one consent is crisply articulate and lightly shaped, and consonants are attacked with voracity. Most of the choral contributions have sweetness and delicacy. Stephen Layton lets the performers off the leash a little in the final pealing 'Alleluia' sections of each anthem, and in some dynamic passages of Let God arise, based on Dixit Dominus. The Academy of Ancient Music's playing is often understated, and the introductory sonatas of Let God arise and My song shall bealway feature convivial oboe solos played by Katharina Spreckelsen. The four illustrious soloists excel in numerous short movements.
Iestyn Davies navigates some difficult low passages in 'Praise him, all ye that in his house' (HWV254) without traces of strain. Neal Davies is authoritative, James Gilchrist is on fine dramatic form in 'Like as the smoke vanisheth' (HWV256a), and Emma Kirkby shows her stylistic intelligence and masterful communication of text in the radiant opening of HWV252. It is enjoyable to hear some of Handel's lesserknown and more intimate English church music performed with such elegant restraint and skill.

…the 40 members of the Choir of Trinity College, Cambridge, sing with flexibility and lightness. The opening chorus of O praise the Lord with one consent is crisply articulate and lightly shaped, and consonants are attacked with voracity. The four illustrious soloists excel in numerous short movements. It is enjoyable to hear some of Handel's lesser-known and more intimate English church music performed with such elegant restraint and skill.

The choir’s firm tone and tightly disciplined singing, coupled with the Academy’s polished ensemble and phrasing, are a considerable improvement on The Sixteen and O’Reilly’s sometimes raw and slightly untidy performances

The ten undergraduate sopranos here sing with charm, clarity and a bright tone that never strays into faux-treble territory, and their flexibility in this often very florid music is impressive...Vocal soloists are uniformly splendid. Thomas Hobbs has the lion’s share of the solo duties, and rises to the challenge with consistently beautiful tone and easy agility.

The choir sings with their usual purity of tone and clear diction while the Academy of Ancient Music plays with convincing vigour in the sprightly double-dotted passages.