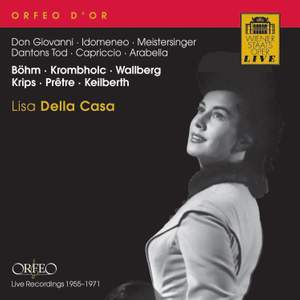 No singer at the Vienna State Opera or elsewhere has been as closely associated with the title role in Strauss's Arabella as Lisa Della Casa, who celebrates her 90th birthday on 2 February 2009, and yet we should be guilty of doing the Swiss soprano a grave disservice by reducing her repertory to this one role alone.This point is well illustrated by an impressive portrait of the singer that is released as part of ORFEO's series 'Wiener Staatsoper live'. Lisa Della Casa took part in the opening performances in the rebuilt house in 1955, a bundle of nervous energy as Donna Anna under Karl Böhm, with Anton Dermota as Don Ottavio.With the silvery gleam of her soprano and her crystalline high notes, she was also a natural choice as Eva in Die Meistersinger, a role she also sang at Bayreuth and the Met. Here she demonstrates that she was capable of raising standards to those worthy of an international festival whenever she appeared with other world-class singers.The same is true of the closing scene from Capriccio under Georges Prêtre and of the scene from Arabella in which her sister, Zdenka, is played by Anneliese Rothenberger in an inspired piece of casting. As Lucile in Gottfried von Einem's Dantons Tod, under Josef Krips in 1967, she proved a worthy successor to Maria Cebotari, who at the start of Della Casa's career had recommended her younger colleague for more challenging roles.Von Einem's opera by no means marked a new direction in the singer's career: far from taking on character roles in the later stages of her career, she was still singing lyric soprano roles until shortly before she retired from the stage. A unique voice, with distinctive simplicity and even phrasing.