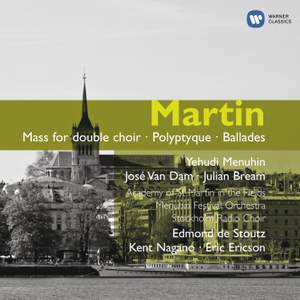 Academy of St. Martin in the Fields, Menuhin Festival Orchestra...

Martin, F: Songs of Ariel from Shakespeare's ‘The Tempest'

Before You Can Say "Come" And "Go"

You Are Three Men Of Sin

Where The Bee Sucks

Frank Martin (1890-1974) was born in Geneva and received encouragement from the great conductor Ernest Ansermet but was primarily self-taught as a composer. Like his compatriot, Honegger, Martin had to try and fit in against the two neighbouring musical traditions of France and Germany. This was very difficult as France was following the influence of Les Six whilst Germany tended towards Schönberg and his students, Berg and Webern. The first work in this collection to be composed was the Mass from 1922/6 which he considered to be “something concerning only God and myself”. This is music of archaic, spiritual purity, which he only allowed to have its premiere 40 years after its composition. The Four Pieces for Guitar from 1933 were the first work in which Martin experimented with Schönberg’s serial technique. During the second world war Martin produced some remarkable work – the Ballade for flute, string orchestra and piano in 1941, the Six Monologues from Jederman in 1943/4 and the Petite Symphonie Concertante for Harp, Harpsichord, Piano & Strings in 1944/5 which established his international reputation. The five Ariel choruses were studies made in 1950 for his full opera which followed over the next five years. In 1956 he settled in Naarden, a little town in the Netherlands to concentrate more on composition although from 1950 to 1957 he did teach in Cologne where one of his students was Stockhausen. The final works in this collection are the Ballade for Viola, Wind Orchestra and Percussion from 1972 and the Polyptyque of 1973 which is a group of six images of the Passion of Christ for violin solo and two string orchestras. It was recorded by its dedicatee, Yehudi Menuhin, in September 1974, two months before the composer’s death.