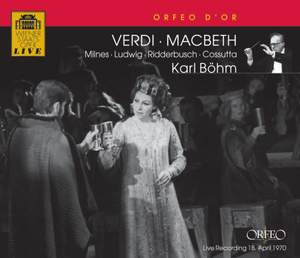 Lady Macbeth has rarely seemed more of a Lady than in Ludwig’s hands on this live 1970 recording from Vienna – her arch-manipulator is regal, elegant and icily pragmatic right up until the final... — Katherine Cooper, Presto Music, 16th March 2018 More…

Act I Scene 4: S'allontanarono! (The Witches)

Even today it is difficult to cast the two main roles in Verdi's Macbeth satisfactorily, but this was never in doubt at the Vienna State Opera's highly successful new production in 1970. Making his house and European début, the young Sherrill Milnes immediately impressed with a voice powerful and even throughout its whole range. Milnes reveals his ability to create a fully rounded character in his depiction of a man driven by fear, craving power. He was partnered by the great Christa Ludwig, who at this stage in her career was already a Viennese institution.The role of Lady Macbeth represented the last of the hochdramatisch roles that she had essayed during the previous period and how! Availing herself of a darktoned timbre and range, as specified by Verdi, she portrayed Lady Macbeth as the seductress who leads Macbeth into a life of crime. In this she was supported by Karl Böhm, whose conducting combined the subtlest of nuances with real energy in the present live recording, robbing it of all sense of routine.The same is true of the smaller roles, which are cast from strength: Carlo Cossutta - later a distinguished Otello - brings his ringing tenor to Macduff's music expressive in lamentation and accusation, whilst avoiding any hint of sentimentality. Karl Ridderbusch's Banquo, finally, makes it clear why the great German bass was in a class of his own.

Lady Macbeth has rarely seemed more of a Lady than in Ludwig’s hands on this live 1970 recording from Vienna – her arch-manipulator is regal, elegant and icily pragmatic right up until the final sleep-walking scene, where her mental disintegration is all the more harrowing for being so sudden and absolute.