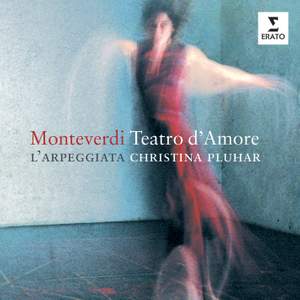 The gorgeous singing of the soloists and stylish instrumental performances, though dazzling and gimlet-eyed, are also elegant and respectful without being obsequiously slavish to convention. — BBC Music Magazine, May 2009, 4 out of 5 stars More…

Recording of the Week,  Monteverdi as you've never heard it before!

Christina Pluhar and L’Arpeggiata make their debut on Virgin Classics with a fascinating exploration of Monteverdi’s ‘Theatre of Love’, aided by superb contributions from Philippe Jaroussky and Nuria Rial.

This, L’Arpeggiata’s first release on Virgin Classics, explores music by Claudio Monteverdi, blending instruments and voices – including those of countertenor Philippe Jaroussky and soprano Núria Rial in a kind of intoxicating baroque jam session. It includes the final duet from L’incoronazione di Poppea, often cited as one of the most sensuous and beautiful love scenes in all opera.

Founded in 2000, L’Arpeggiata is a French-based ensemble directed by Austrian-born harpist and lutenist Christina Pluhar. Its members, some of the leading European soloists in their field, join forces with exceptional singers from the worlds of baroque and traditional music. The group’s particular focus is on French, Italian and Neapolitan music of the 17th century and it works with often daring instrumental improvisations, exploiting rich textures created by blending a variety of plucked instruments, and a vocal style influenced by traditional music.

The group tours extensively and its recordings on Alpha and Naïve have sold over 200,000 copies. Christina Pluhar describes L’Arpeggiata as "an international cocktail of musicians with lots of character. There is a basic ensemble of regular players and then they are joined by other performers for each project. I choose not to work with the same singers all the time, preferring to give myself the option of looking for voices that seem to me to be perfect for specific repertoire … There are so many different ways of using the human voice and I think there is so much experimentation one can do, even in early music. When I’m accompanying vocal music, I try to go as far as I can in terms of improvisation, searching for colours which reflect the voice of the chosen singer and which determine and support feelings. Emotions are very close to the surface in speech, the singer’s voice, and in the words whose meaning we’re trying to convey.

This recording was made in the celebrated Vredenburg concert hall in Utrecht, where L’Arpeggiata was resident ensemble at the Festival Oude Muziek in 2006.

‘A range of styles are explored…with a genial ease that belies the technical brilliance and musicianship without which it couldn’t possibly work. Aside from their superb music-making, the players convey a sense of utter conviction in what they are doing’ Gramophone

‘If you haven't met baroque harpist Christina Pluhar and her group l'Arpeggiata, then it's time you did.’ BBC Radio 3

The gorgeous singing of the soloists and stylish instrumental performances, though dazzling and gimlet-eyed, are also elegant and respectful without being obsequiously slavish to convention.

The technical perfection, and the easy informality with each other and the music, with which these pieces are performed, makes for a captivating listen...Meld Philippe Jaroussky's sweet countertenor into the mix (who is also letting his hair down) and you've got something that is very special, and very surprising.

The thing that makes this disc really outstanding is the quality of the singers and instrumentalists. Counter-tenor Philippe Jaroussky sings his slower numbers particularly exquisitely and they all perform with such a natural sounding affinity to the music that even the more extrovert moments don’t sound out of place.