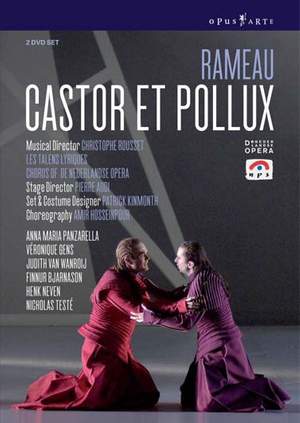 Christophe Rousset directs a superb ensemble performance with a cleanly voiced choir and an acute ear for Rameau's pungent orchestration. Patrick Kinmoth's set and costumes have an austere,... — BBC Music Magazine, January 2009, 5 out of 5 stars More…

Castor et Pollux is arguably Rameau’s finest creation in the tragédie lyrique style. Its libretto, based in mythology, focuses on an unusual theme: the self-sacrificing love between Castor, who is mortal, and his immortal brother, Pollux. When Castor is killed while defending his beloved Télaire from an attempted abduction, Pollux resolves to give up his immortality and take Castor’s place in the Underworld. After passionate debate over who will live and who will die, the brothers are eternally united, transformed into the constellation Gemini. The strikingly luminous sets, depicting a stylized version of the constellation, give this fabulous production, staged by Pierre Audi and conducted by Christophe Rousset, a glorious 21st-century baroque look.

‘To turn almost three hours of obscure French baroque opera into a popular hit is the kind of stunt at which the Netherlands Opera excels. … All the singers are beautiful and polished…Veronique Gens as Phebe manages to rise beyond form and truly breathe life into her character's phrases. Gens's performance is radiant and burnished, full of subtlety and character.' Bloomberg.com

Christophe Rousset directs a superb ensemble performance with a cleanly voiced choir and an acute ear for Rameau's pungent orchestration. Patrick Kinmoth's set and costumes have an austere, almost sci-fi quality, but they match Pierre Audi's unfussy production with its genuine sense of dramatic engagement.

This production of Rameau's second great tragédie lyrique has…been recorded at Netherlands Opera in January 2008. Unfussy yet handsomely done, it sits well with the leanly focused nature of the work… finding space for spectacle and dance without forgetting its essential task of telling the story of the twins whose fraternal love excepts no level of self-sacrifice. ...Rameau's brilliantly composed airs, expressive recitatives, infectious dances and sturdy choruses are of untouchable high quality. The good-looking cast includes two French... Véronique Gens, haughty and magnificent as the tormented Phébé who plots jealously against Télaïre, and Nicolas Testé... vigorous and sonorous Jupiter.

Incredibly, this is the only individual performance of Rameau's great exploration of love and mortality, but it's difficult to imagine it receiving a finer account than it does from this Netherlands Opera team, with Christophe Rousset heading up Les Talens Lyriques and the late Pierre Audi's stripped-down staging radiating austere beauty.