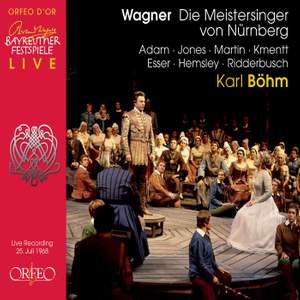 Choir and Orchestra of the Bayreuth Festival, Karl Böhm

The 1968 Bayreuth Festival opened with a new production of Die Meistersinger von Nürnberg that seemed to be heading for disaster when the central role of Hans Sachs had to be recast after the final dress rehearsal. But Theo Adam struck gold in the scene in his workshop in Act Three and later on the Festival Meadow, dispelling all possible misgivings. In Wolfgang Wagner's first Bayreuth production of his grandfather's only mature comedy,Adam created a multifaceted portrait of the cobbler-poet using all the resources of his striking bass-baritone voice, a voice that was penetrating in all its registers, yet also capable of great subtlety. In the covered pit, Karl Böhm brought out the lyric colours and fleeter moments in the score, allowing the other singers, too, to shine with their young and unspoilt voices.Waldemar Kmentt, for example, had largely been known as a Mozart tenor until then, but as the young knight Walther von Stolzing, his lean tone and ease of emission set the highest standards in casting this role.The pedantic town clerk is sung by the English baritone Thomas Hemsley with clear diction and an unusually lyrical baritonal colour, while many of the remaining Masters include eminent names such as Günther Treptow, Sebastian Feiersinger and William Johns, representing three generations of 'heavy' heldentenor voices. No less worthy of mention are two of the foremost German basses of the 20th century: Karl Ridderbusch, already auditioning for the part of Hans Sachs in his delivery of Pogner's testing address, and Kurt Moll as the Night Watchman - proof of the fact that in Bayreuth this secondary role has long been cast with an eye to the future.The Bayreuth Festival Orchestra , as so often on magnificent form, and the Festival's fully committed chorus contribute to the rounded impression left by this live recording from 1968.