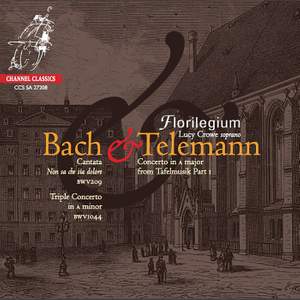 Lucy Crowe… conveys the intimate chart of her two recitative and arias with clarity of diction and graceful articulation. The Telemann… [Concerto] is given a beguiling, playfully alluring account... — BBC Music Magazine, January 2009, 4 out of 5 stars More…

Telemann: Concerto in A Major from Tafelmusik Part I

Music of the two great composers Telemann and Bach, combined on this recording with the musicians of Florilegium. The two composers’ paths crossed in Leipzig; yet the different directions their lives would take was evident from early on: for Telemann the new galant style, for Bach the perfecting of his contrapunctal skills. Regular performances in some of the world's most prestigious venues have confirmed Florilegium's status as one of Britain's most outstanding period instrument ensembles.

Following a recent performance at London's Wigmore Hall The Times newspaper wrote: Florilegium climbed the heights of dancing bliss and left the Wigmore sighing with pleasure. They have become an indispensable feature on the early music landscape. Since Florilegium’s formation in 1991, they have established a reputation for stylish and exciting interpretations of music from the baroque era to the early romantic revolution.

Lucy Crowe was born in Staffordshire and studied at the Royal Academy of Music. She received the Royal Overseas Gold Medal in 2002, won the Second Prize at the 2005 Kathleen Ferrier Awards and was made a Wigmore Young Artist. Already in demand as a recitalist, she has given recitals at Wigmore Hall and at the Belfast Festival, St Martin in the Fields, the Norfolk and Norwich Festival, Chelsea Arts Club and the National Portrait Gallery.

Lucy Crowe… conveys the intimate chart of her two recitative and arias with clarity of diction and graceful articulation. The Telemann… [Concerto] is given a beguiling, playfully alluring account which can be warmly recommended.

The relationship between Florilegium and Telemann has been described in these pages as a marriage made in heaven and there is further evidence of such a close affinity in their delectable performance of the Concerto in A major… As in their performance of Bach's Triple Concerto in A minor (BWV1044), Florilegium's players possess an admirable sense of proportion and balance, not least with Ashley Solomon's flute sparkling with clarity while often gently within the overall balance rather than swamping it. Curious Bachians will find things to enjoy in the Sinfonia and two arias, with Solomon's assured and light playing complemented by Lucy Crowe's sincere and stylish singing.

Few can match Florilegium's interpretative flair and technical accomplishment in this repertoire.