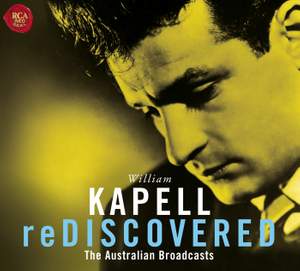 William Kapell was killed in a plane crash just south of San Francisco in October 1953 – the flight that was taking him home a week after he had completed a triumphant three-month tour of Australia.... — Gramophone Classical Music Guide, 2010 More…

Sarabandes I and II

Ballet of the Unhatched Chicks

The Hut on Fowl's Legs

The Great Gate at Kiev

A virtuoso pianist of the mid-twentieth century, William Kapell’s brooding good looks and explosive interpretations of Russian piano literature made him a star. His death in a plane crash at the age of 31 put an end to a career marked by fiery personality, technical mastery, and unstinting devotion to his craft. Many considered him the first virtuoso American pianist — certainly the most famous one until Van Cliburn — whose early death denied him more enduring popularity. These recordings are a stirring reminder of the talent upon which his fame rested during his lifetime

This digitally remastered two-disc set — the latest in Sony BMG Masterworks’ reDiscovered series — compiles performances from four of the concerts on Kapell’s tour of Australia and makes them available for the first time as a lasting tribute to the incredible talent and influence of William Kapell.

William Kapell was killed in a plane crash just south of San Francisco in October 1953 – the flight that was taking him home a week after he had completed a triumphant three-month tour of Australia. He was 31 years old. Several items from this final trip have surfaced over the years (the Rachmaninov, Mussorgsky and Chopin's Second Sonata), but other rumoured recordings never materialised – until 2003, when the titles issued here were identified in a huge collection of acetate discs recorded off-air by an Australian music lover.
The surfaces are noisy, sometimes heavily swishy and the sound is often horribly distorted despite the best efforts of producer Jon M Samuels.
His apologia notes that, because they did not make it on to the acetates, a passage in the final movement of the Rachmaninov had to be patched (from a 1948 performance), and that the first movement of the Bach Suite and final pages of the Mussorgsky are taken from other sources.
You will not need to be told where these 'edits' occur.
So, is it all worth persevering with? Oh yes.
This is the playing of a sublimely gifted artist.

This is the playing of a sublimely gifted artist.