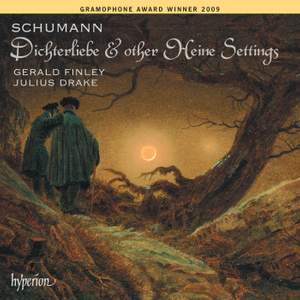 XXI. Was will die einsame Träne?

Why another Dichterliebe recording? Because Gerald Finley has simply one of the greatest voices of his generation, and is an artist at the peak of his powers. He brings to this noble song cycle the supreme technical ability and penetrating musical understanding that characterize all his performances, whether on the concert platform, in the recording studio or on the great opera stages of the world. This is his fourth disc with collaborator Julius Drake, and the partnership has proved to be a uniquely rewarding one.

This fine recital also includes many of Schumann’s other Heine settings. The extremes of elation and despair in Heine’s poetry stimulated Schumann to write some of his most poignant and unforgettable songs. This is truly a disc to treasure.

In close collusion with the ever-sentient Julius Drake, Gerald Finley gives one of the most beautifully sung and intensely experienced performances on disc of Schumann's cycle of rapture, disillusion and tender regret. This is a Dichterliebe firmly in the past tense, the poetlover achingly resigned from the outset. Finley sings the second song, 'Aus meinen Tränen', as if in a trance, and lingers luxuriantly, even masochistically, over the remembered 'Ich liebe dich' in 'Wenn ich' in deine Augen seh''. Yet here and elsewhere some dangerously slow tempi are vindicated by the acuity of his verbal and musical responses. Where most singers end 'Im Rhein' in wistful tenderness, Finley infuses his final words with a wry bitterness. The disenchantment of 'Ich grolle nicht' is already glimpsed. In the cycle's latter stages Finley veers between numb reverie and acerbic self-dramatisation.
The birds' assuaging response in 'Am leuchtenden Sommermorgen' is magical, barely breathed, the mounting trauma of the funereal dream-song 'Ich hab' im Traum geweinet' chillingly conveyed, the dissolving vision of the penultimate 'Aus alten Märchen' relived with ineffable sadness. Adding a cutting edge to his warm, mahogany baritone, Finley imbues the final song with savage irony, before the rueful, healing close. Throughout, Drake's playing is a model of clarity and acutely observed detail (he is more attentive than most to bass-lines), epitomised in his fluid, exquisitely voiced epilogue.
Singer and pianist are just as compelling in the other Heine settings here. The church acoustic is more resonant than is ideal for Lieder, though that hardly detracts from a glorious Schumann recital.

In close collusion with the ever-sentient Julius Drake, Gerald Finley gives one of the most beautifully sung an intensely experience performances on dic of Schumann's cycle of rapture, disillusion and tender regret. This is a Dichterliebe firmly in the past tense, the poet-lover achingly resigned from the outset. Singer and pianist are just as compelling in the other Heine settings here.

[Finley] sings Schumann's great song-cycle with much tonal beauty and feeling, above all capturing the deep disillusion of Schumann's inspiration

[Finley] brings eloquence to the text and maturity to his interpretations, but with a still youthful-sounding voice. Darker and more “bassy” of tone than Dieskau, he is especially impressive in the sardonic and bitter songs...Finley is a gripping narrator, too, in the tale of Belshazzar’s feast, and can refine his voice to the most arresting of internalised confidences in the love songs to Clara Wieck.

Finley is a much less knowing, more direct performer than Fischer-Dieskau, concentrating less on precise verbal nuance (though his German diction is wonderfully clear) than on more generalised expressive contours, but the effect is still overwhelmingly powerful.

Andrew Clements 5 out of 5 stars

Doubts as to whether the world needs yet another Dichterliebe are allayed by a performance that probes the extremes of Schumann's evocation of remembered, blighted love. Gerald Finley's burnished baritone is one of the most beautiful voices to have recorded the cycle.

Grotesquerie, beauty, irony, sentimentality and overwhelming passion mingle to breathtaking effect...His in-the-moment honesty is matched note-for-note by pianist Julius Drake, who partners him with a superb sense of drama and detail. It's a recital which can stand comparison with the greatest Schumann recordings.