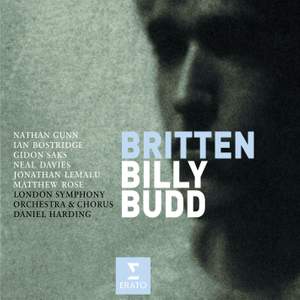 …this is a good, often exciting performance, but Hickox and especially Britten are hard acts to follow. — BBC Music Magazine, October 2008, More…

Pull, my bantams! Pull, my sparrow-legs!...Who did that? (First Mate et al)

Ay, at Spithead the men may have had their grievances (Vere / Sailing Master / First Lieutenant)

We are, sir. Claggart is an able one...Land on the port bow, sir (First Lieutenant / Vere / Sailing Master / Ratcliffe)

Blow her away, Blow her to Hilo (Red Whiskers / Chorus / Billy / Donald / Dansker)

Over the water, over the ocean (Chorus / Claggart)

I don't like the look of the mist (Vere / First Lieutenant)

With great regret I must disturb your honour (Claggart / Vere)

There you are again, Master-at-arms (Vere / Claggart / Boy)

Master-at-arms and foretopman, I speak to you both (Vere / Claggart / Billy)

Poor fellow, who could save him? (First Lieutenant / Sailing Master / Ratcliffe)

I accept their verdict (Vere)

Look! Through the port comes the moon-shine astray! (Billy)

"According to the Articles of War..." (All except Vere)

Down all hands! And see that they go! (First Lieutenant et al)

We committed his body to the deep (Vere)

After the award-winning recording of Britten’s Turn of the Screw, released on Virgin Classics in 2002, Daniel Harding and Ian Bostridge meet again around Britten in his great masterpiece, Billy Budd. This new recording is a new asset to the label, which has planned a complete Britten opera cycle.

The opera, in its definitive 2-act version, was recorded during the 2 concert performances at the Barbican Hall on 7th & 9th December 2007. As principal guest conductor, Daniel Harding conducts the London Symphony Orchestra. The all-male cast boasts, along with Ian Bostridge as Captain Vere, American baritone Nathan Gunn in the role of Billy Budd, and Israeli bass-baritone, Gidon Saks, portraying the fiendish Claggart. EMI artist Jonathan Lemalu also contributes to the cast.

“Billy Budd is one of Britten’s greatest masterpieces, containing three of his major operatic roles. Set amid the claustrophobia and cruelties of a battleship in Nelson’s time, it shows the ruthless destruction of good-hearted able seaman Budd by sadistic master-at-arms Claggart, and the mental conflicts of intellectual but weak-willed Captain Vere, who is powerless to prevent it. The music is suitably gripping, by turns intense and exciting, and full of the insights and inspirations typical of its composer.” www.barbican.org.uk

…this is a good, often exciting performance, but Hickox and especially Britten are hard acts to follow.

Bostridge's voice, always smooth and luxuriant, is in its prime, with an extraordinary strength and flexibility of colour. And he's a storyteller and actor par excellence, with a massive emotional range

…the performance carries passionate conviction. Daniel Harding conducts sensitively…but more especially with a feeling for pace and dramatic urgency. The company… work together to create… "this hateful world" (in Billy's). And the chorus… have their share of grand roughness too, sounding more plausibly sailor-like than usual.

The great glory of Harding's performance is the playing of the orchestra, in a work in which it frequently assumes the role of a major protagonist. Harding's handling of those textures... is uncompromisingly direct, and the playing of the London Symphony Orchestra has the right blend of bite and pathos...Nathan Gunn is wonderfully touching as Billy Budd

When you can't see him, Ian Bostridge is one of the finest tenors we have…The great roles Britten wrote for Pears suit Bostridge's timbre perfectly…in this fine recording.

Bostridge portrays a solemn, neurotic and painfully rueful Captain Vere…His light, effete, officer-class tenor soars above his gruffer crew. The chorus sings the rolling 'heave away' with an infectiously queasy lilt, while Harding makes the LSO swell and recede like the Atlantic Ocean.