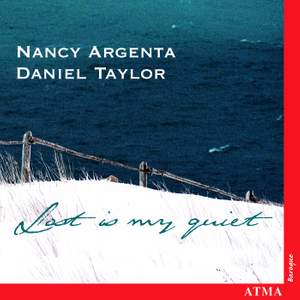 Lost is My Quiet

Purcell, D: Pausanias, the Betrayer of his Country

Pausanias, the Betrayer of his Country, Z. 585: My dearest, my fairest

The Mad Lover: As Cupid roguishly one day

Purcell: Lost is my quiet for ever, Z502

The Comical History of Don Quixote, Z. 578: I burn, my brain consumes to ashes

Welcome to all the pleasures, Z. 339: Here the Deities approve

Blow: O that mine eyes would melt into a flood

Purcell: Prophetess or The History of Dioclesian, Z627

The Prophetess, or The History of Dioclesian, Z. 627: Since from my dear Astrea's sight

Two of the most accomplished vocal artists Canada has produced share their love of English song from Purcell's time: solo pieces and duets written for the theatre and for celebratory odes by the Orpheus Britannicus himself, as well as some tasty morsels by his greatest "disciple," John Eccles. John Blow and Henry's younger brother, Daniel, also add more than their two-pence worth. A very worthy band of instrumentalists complete the programme with a choice selection of "ayres" (in truth, instrumental suites) from two theatrical works to which Henry Purcell contributed.