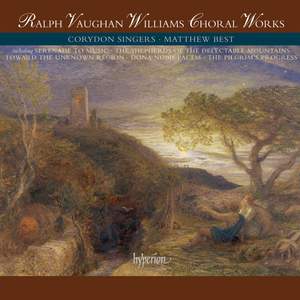 Best has a fine sense of VW as a dramatic composer, bringing tremendous urgency to Dona Nobis Pacem and real passion to the Five Mystical Songs. Best's Serenade to Music is the original, not... — BBC Music Magazine, July 2008, 5 out of 5 stars More…

II. I got me flowers

V. The Angel of Death has been abroad – O man greatly beloved

II. Who is this fair one?

Vaughan Williams: A Song of Thanksgiving

Vaughan Williams: The Shepherds of the Delectable Mountains

Vaughan Williams: The Hundredth Psalm 'O be joyful in the Lord'

Issued to mark the fiftieth anniversary of Vaughan Williams’s death, this collection is tantalizing: it starts with one of the best-selling discs in the the catalogue, the Serenade to Music, and includes such favourites as the Five Mystical Songs and The Hundreth Psalm. There are also two intriguing pairings: in Dona nobis pacem, RVW warns of the impending doom of WWII, in A song of thanksgiving we hear his moving response to its successful conclusion; in The shepherds of the delectable mountains we hear an early working of Bunyan’s literary masterpiece, later extensively reworked in the landmark 1942 BBC radio production of The Pilgrim’s Progress featuring Sir John Gielgud and reprised here, this time in condensed form.

Best has a fine sense of VW as a dramatic composer, bringing tremendous urgency to Dona Nobis Pacem and real passion to the Five Mystical Songs. Best's Serenade to Music is the original, not least in matching the star quality of the singers, but also in its magical atmosphere. He equally evokes VW's sensuous side, not only in Flos Campi but also in the Magnificat with its ecstatic writing for female voices.

Performances like these don’t come along very often; each one is an absolute winner, and with rich, atmospheric recording quality the satisfaction is of a very special quality

Matthew Best and the Corydon Singers have made something of a speciality of English choral music, and this four-CD box-set showcases their beautiful sound and consummate musicality. They're mostly smaller-scale works, though Dona Nobis Pacem features, and there are some less well-known items such as the Song of Thanksgiving - which in the Corydon Singers' capable hands are just as appealing as the established favourites.

The performances are splendid, graced by such soloists as Thomas Allen (Dona nobis pacem, Five Mystical Songs) and Bryn Terfel (The Shepherds of the Delectable Mountains)..The rapturous Serenade to Music has a cast of 16 singers fit to rival those of the original recording. Anne Dawson’s top note on the word “music” is spine-tingling.