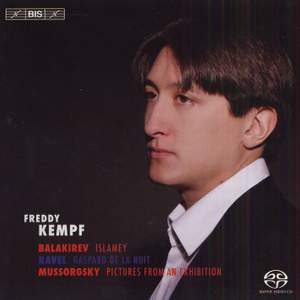 For fans of the contemporary virtuoso, this disc is not only stupendously recorded, but a sign that standards these days are extraordinarily high in this area. — BBC Music Magazine, Proms 2008, 4 out of 5 stars More…

V. Ballet of the Chickens in their Shells

Two years since his last release on BIS, Freddy Kempf returns to present a programme featuring three central works in the great virtuoso repertoire for solo piano. Each piece has the qualities in terms of characterisation and timbre that have resulted in well-known orchestral arrangements. Pictures from an Exhibition was composed following the death of Mussorgsky’s friend, the painter and architect Viktor Hartmann. Balakirev’s Islamey was composed five years earlier and was long regarded as the most difficult work in the entire piano repertory, and in fact, when Ravel 1908 composed Scarbo, the third movement of Gaspard de la Nuit, he specifically wanted to write something that would be even more difficult.

For fans of the contemporary virtuoso, this disc is not only stupendously recorded, but a sign that standards these days are extraordinarily high in this area.

After a perhaps necessary break Freddy Kempf returns to the studio armed with a formidable programme formidably played. In the Mussorgsky his immense energy and facility allows him an unusual degree of freedom with a brisk opening Promenade followed by an unleashing of his virtuoso credentials in 'Gnomus'. He takes a uniformly forte view of 'Bydlo' (though his final fading of the vision is masterly). And so, too, is his enviable verve in both 'Ballet of the Unhatched Chicks' and 'Limoges'. 'Baba Yaga' is boldly characterised, and there is a dramatic splash of colour, a sudden pedal haze at 1'12” in 'The Great Gate of Kiev'.
In Ravel's Gaspard every teeming complexity is resolved with the coolest of mind and hands.
You may query a lack of rhetoric or broadening at the climax of 'Ondine' (it is marked un peu pluslent) and a less than fully sympathetic way with the many piano and pianissimo markings in 'Scarbo'. Yet this is among the finer recordings of this much-recorded masterpiece. In Balakirev's Islamey Kempf relishes everything the composer throws at him. This is 'live' virtuosity with a vengeance, with absolutely no hint of a safety net, of playing within studio confines.
A superb, brilliant-toned Steinway has been captured in admirable sound, and this recital is among the finest of Freddy Kempf's offerings to date.

…a formidable programme formidably played. This is "live" virtuosity with a vengeance, with absolutely no hint of a safety net, of playing within studio confines.

Freddy Kempf's forthright performances of all three [works] contain some impressive moments, and his mastery of the technical challenges in the works is formidable, but in each case individuality and character are in short supply. There's plenty of colour in Pictures, and a high degree of characterisation, but little of the physicality and teetering excitement that Richter's famous live recording has in bucketfuls, while the subtly shifting textures of Ravel's three fantasy portraits are too prosaic for music that should glimmer and glitter in an almost intangible and indefinable way.

Freddy Kempf here tackles three giants of the piano repertoire and conquers them with spirit and imagination. Armed with all the necessary technical resources, he is able to bring colour and well-defined character to Pictures from an Exhibition, revealing how ingeniously Mussorgsky exploited the piano's palette of sound without the aid of all those later arrangers who chose to embellish it with orchestral timbres.
One of those was Ravel, whose Gaspard de la nuit here glows, ripples and, in "Scarbo", bristles with malevolence. The bravura of Balakirev's Islamey is brilliant.

The pianist Freddy Kempf looks poetic and serious on the cover photo. He’s also straining for effect in these performances. In the Mussorgsky Pictures at an Exhibition he settles too quickly for the brilliance that screams and thumps. There’s some of that, too, in the finale to Ravel’s Gaspard de la Nuit, though the hanged man in Le Gibet is barely sensed. Still, he can be subtle, and Balakirev’s Islamey, the virtuoso’s nightmare, comes off well