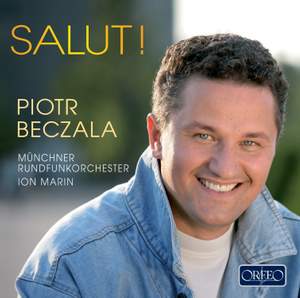 The voice has body, especially in the upper middle register, and an exciting ring on top. — Gramophone Magazine, Awards Issue 2008 More…

Un ballo in maschera, Act I: Or tu, Sibilla

Piotr Beczala has established himself as one of the most outstanding young lyric tenors. Born in Southern Poland, he studied with Pavel Lisitsian and Sena Jurinac. After his first engagement at the Landestheater in Linz (Austria) he became a permanent member of the Zurich Opera and remains closely associated with this company.

He made his Covent Garden debut as the Italian tenor in Rosenkavalier and followed with an acclaimed Faust in 2004 and 2006. He returned as Lensky in Eugene Onegin this April with another Rosenkavalier at the Festival Hall, again with Zurich Opera.

He made a sensational role debut, in January of this year, as Riccardo in Verdi's Un ballo in maschera with the Berlin State Opera, where he was enthusiastically celebrated by both audience and press.The last two years

has seen a series of successful firsts including Alfredo, in La Traviata, with the Bavarian State Opera, Berlin's Deutsche Oper and also in Tokyo; the Duke in Rigoletto at La Scala and as his debut with the Metropolitan Opera; and Lensky in Eugene Onegin with the San Francisco Opera, where he returned as Tamino last year. In Frankfurt and in Munich he has been acclaimed for his portrayal of Werther, as was his Don Ottavio at Zurich Opera and the Salzburg Festival. In 2007 he added Edgardo in Donizetti's Lucia to his repertoire: singing this role he will return to the New York Met in autumn 2008.

His wide concert repertoire ranges from Mozart, Cherubini and Haydn's sacred music, via Rossini's Stabat Mater and Petite Messe Solennelle to Mahler's Das Lied. He has appeared on many recordings and DVDs but this is his first recital disc with excerpts from French and Italian operas, many of which he has already sung on stage.

The voice has body, especially in the upper middle register, and an exciting ring on top.

Beczala displays throughout not only a tone of liquid gold but also a sensitive engagement with the shape of Gounod’s line as well as the meaning of the words he sings. He caps the performance with a
flawlessly placed top C that is fully integrated into the rest of his voice. It’s a simply glorious sound.

… yet its chief glories are musical, not least the sterling performance of the young Polish tenor Piotr Beczala as Riccardo, which has Berliners drawing comparisons to Jussi Björling. He is certainly the best in this challenging role since Pavarotti