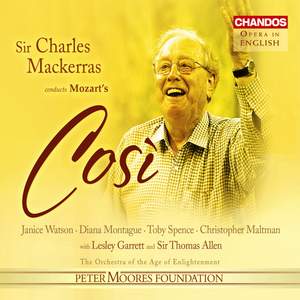 This is an account of Così which seems to put momentum first. The opening chord, more ferocious than one would expect, gives way to a rattling overture, and tension and pace never let up. — BBC Music Magazine, May 2008, 3 out of 5 stars More…

Act I: Trio: Woman's faith is like a phoenix (Don Alfonso, Ferrando, Guglielmo)

Act I: Trio: I shall hire a band of players (Ferrando, Guglielmo, Don Alfonso)

Act I: Duet: This portrait alone is the face of Adonis (Fiordiligi, Dorabella)

Act I: Recitative: Here they are (Fiordiligi, Dorabella, Don Alfonso)

Act I: Recitative: Are they gone? (Dorabella, Don Alfonso, Fiordiligi)

Act I: Recitative: A hell of an existence (Despina)

Act I: Recitative: My ladies, here is your chocolate and biscuits (Despina, Fiordiligi, Dorabella)

Act I: Aria: In lovers and in soldiers (Despina)

Act I: Recitative: What a silence! (Don Alfonso, Despina)

Act I: Aria: Like a fortress in ocean founded (Fiordiligi)

Act I: Aria: Her eye so alluring (Ferrando)

Act I: Finale: Why has fate my life enshrouded (Fiordiligi, Dorabella)

Act I: Finale: To die is all I long for (Ferrando, Guglielmo, Don Alfonso, Fiordiligi, Dorabella, Despina)

Act II: Recitative: Well, I declare, you are a funny pair of ladies (Despina, Fiordiligi, Dorabella)

Act II: Aria: At fifteen a girl already must be truly wise (Despina)

Act II: Recitative: Come at once to the garden (Don Alfonso, Dorabella)

Act II: Duet: This heart that I give you (Guglielmo, Dorabella)

Act II: Recitative: Cruel one, would you leave me? (Ferrando, Fiordiligi)

Act II: Recitative: Now at least you are acting as a sane woman should (Despina, Dorabella, Fiordiligi)

Act II: Duet: All too slowly the hours are fleeting (Fiordiligi, Ferrando)

Act II: Finale: May the love, that has united them (Chorus, Ferrando, Guglielmo, Fiordiligi, Dorabella)

Così fan tutte is Mozart’s third opera to a Da Ponte libretto. It is in opera buffa style and has only six characters, two couples and an elderly philosopher and a trusted maid. In this recording Lesley Garrett sings the part of the maid, Despina, and the celebrated veteran Sir Thomas Allen the philosopher, Don Alfonso. Despite the somewhat cynical storyline this opera contains some of Mozart’s most memorable and sublime music.

The conductor, Sir Charles Mackerras, has spent many years researching performance practice of the eighteenth and nineteenth centuries and is a noted authority on Mozart’s operas. He writes of this recording, ‘it is indeed a

pleasure having the Orchestra of the Age of Enlightenment lending its expertise in tonal colour, phrasing and rhythmic impulse to Mozart’s wonderful score… I have chosen to record this English version of Così fan tutte with

the traditional cuts, thus making it closer to a staged performance’. The English translation, by the Rev. Browne, was first used in London at a performance conducted by Sir Charles Villiers Stanford in 1890.

This is an account of Così which seems to put momentum first. The opening chord, more ferocious than one would expect, gives way to a rattling overture, and tension and pace never let up.

Sir Peter Moores comments that the phrase 'Così fan tutte' is 'almost impossible to translate' into English. Thus it is that the delivery of Ferrando and Guglielmo's pronouncement, under the cynical tutorship of Don Alfonso, is one of the few lines that have not been translated in this volume of the Opera in English series (Alfonso's exclamation 'Misericordia!' is the other one left intact, and rightly so). Sometimes opera in English sounds too close to Gilbert and Sullivan at their cheesiest, but in a sparkling comedy such as Così fan tutte that is not necessarily a bad thing: in fact this is tremendously enjoyable because it allows Anglophones to concentrate on exactly what the characters are saying. So if Opera in English brings a wider audience closer to the heart of Mozart's and da Ponte's masterpiece, then it can only be a wonderful thing.
Of course, it helps that the music has seldom sounded as glorious as it does in the hands of Sir Charles Mackerras and the Orchestra of the Age of Enlightenment. Both are consummate Mozartians, and the pacing, ebb and flow of the music is near-perfect. In particular, the OAE's woodwind are on ravishing form. In terms of stylishness, orchestral sound and the sentimen- tal strength of the playing, this Così is on a par with the finest period-instrument versions (Östman and Gardiner), and arguably has more heart than the OAE's previous recording under Sir Simon Rattle (EMI). The three ladies are animated (but not consistently pleasing on the ear), so the three men steal the show vocally: Sir Thomas Allen is, of course, a renowned Don Alfonso of authority and warmth, Christopher Maltman is a suave Guglielmo, and Toby Spence delivers some of the best Mozart tenorsinging in a long time. Although he falls short in softer music, he brings ringing clarity and declamatory emotion to “Tradito! Schernito!” (here “Her ter-reason is poison”).

…the pacing, ebb and flow of the music is near-perfect. In particular, the OAE's woodwind are on ravishing form. Sir Thomas Allen is, a renowned Don Alfonso of authority and warmth… Toby Spence delivers some of the best Mozart tenor-singing I have heard in a long time.

Mackerras's sparkling account of this delightful opera comes over surprisingly well in English, for the change of language does not impair the vocal lines...Vocally, Toby Spence, as an attractively ardent Ferrando, is the star of the show, and Christopher Maltman partners him well as Guglielmo.

M is for Mozart, Mackerras and magic. The Australian conductor - surely the world’s most illuminating and rewarding Mozartian - conjures sounds of mercurial brilliance and heart-stopping beauty from the OAE and his all-British cast in this vernacular version of Mozart’s most enigmatic comedy.

Charles Mackerras, always a rewarding Mozart conductor, directs a taut, urgent account of the opera. Recitatives tumble inevitably into arias. Yet, despite his penchant for mobile tempos, Mackerras is fully alive to Così 's uniquely voluptuous, nostalgic tinta.
Crucially in an opera of ensembles, the cast works well as a close-knit team, whether in the concerted numbers or in the recitatives, taken at a natural, conversational pace.

This recording lacks an underlying dramatic conviction, despite punchy playing from the Orchestra of the Age of Enlightenment under Mackerras.
It's a shame, because Toby Spence, Christopher Maltman, Janice Watson and Diana Montague are nicely matched fair-weather lovers. But the direction seems moot. Lesley Garrett's devilsome maid Despina hams too much to the absent crowd, tonally rather too music-hall for the rest of the recording.