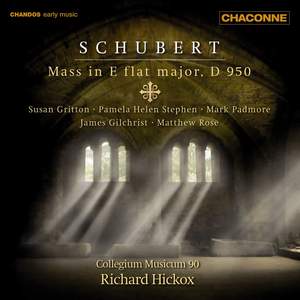 Few period bands have tackled this late, great work, and it comes up gleaming in the care of Collegium Musicum 90 under Richard Hickox's direction. Hickox's soloists are superb, too. — BBC Music Magazine, May 2008, More…

Schubert’s final mass and most ambitious setting was composed during the summer of 1828, only months before his death. It was premiered posthumously, on October 4, 1829, under the direction of his brother,

Ferdinand. Much more than his previous efforts in the genre, it is a choral mass, relegating the vocal soloists to three brief episodes to allow for large chorus passages, and provides an extremely active role for the orchestra. Today, the Mass in E Flat is increasingly acknowledged as an individual masterpiece; powerful and disquieting, more monumental than the fifth, but likewise seeking to reconcile liturgical grandeur with Schubert’s own subjective romantic feeling, whilst still influenced by Haydn, Beethoven and Bach. Its concern for splendour is most obvious in the huge set-piece fugues at the end of the Gloria and Credo but all the time liturgical tradition is coloured by an individual and sometimes unsettling chromaticism, possibly evoking the personal pain he was suffering, not only physically but also the anguish of questioning his faith. The result is some of the most violent anguish encountered in a setting of the text. The recording is dedicated to the memory of Francesca McManus, the manager of CM90 who sadly died at the end of November.

Few period bands have tackled this late, great work, and it comes up gleaming in the care of Collegium Musicum 90 under Richard Hickox's direction. Hickox's soloists are superb, too.

Long the Cinderella work of Schubert's miraculous final year, the E flat Mass is now acknowledged as a powerful masterpiece that mingles liturgical grandeur with the composer's own subjective Romanticism. The apocalyptic Sanctus, with its daring harmonic shifts and heavenstorming crescendi, is a musical counterpart to Turner's molten canvases, while the Agnus Dei has a violent, contorted anguish unmatched in a setting of this text. The least personal, and most problematic, sections of the Mass are the monumental set-piece fugues at the end of the Gloria and Credo, where Schubert ostentatiously displays his contrapuntal credentials, probably with an eye on an official church appointment. At the worthy tempi prevalent 20 and more years ago, these could seem interminable, and were often cut.
Hickox chooses broad tempi, balancing dignity and vitality, and building thrillingly to the climaxes.
In the Kyrie, at a mobile tempo, he combines gravitas with a Schubertian lyrical ease, and later he manages the tempo fluctuations far more naturally. You hear how this heavenly music should sound, with the three soloists (Mark Padmore, James Gilchrist – an ideally matched tenor pairing – and soprano Susan Gritton) singing with pure tone and wondering tenderness.
Hickox scores over most rivals with his extra choral firepower at climaxes, and the wonderfully pungent sonorities of Collegium Musicum 90, whether in the dry, fearful rattle of period timpani in the Credo, the lovely 'woody' oboe and clarinet in the 'Et incarnatus est' or the steely, scything trumpets in the Agnus Dei.

Turn to Hickox and you'll hear how this heavenly music should sound, with the three soloists (Mark Padmore, James Gilchrist - an ideally matched tenor pairing - and soprano Susan Gritton) singing with pure tone and wondering tenderness.

Richard Hickox directs his crack period forces in a strong, sympathetic performance, glowingly recorded. Among rival conductors, Nikolaus Harnoncourt (Elatus) uncovers more disquiet in, say, the Kyrie. But Hickox's pacing and shaping are always convincing, not least in the monumental - and potentially interminable - fugues of the Gloria and Credo. The chorus blaze with white-hot intensity in Schubert's many fff climaxes, while the soloists sing with tenderness and grace in the Benedictus and the ravishing "Et incarnatus est".