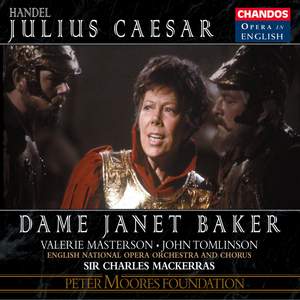 This opera was a personal triumph for Dame Janet. As Caesar, she arms the voice with an impregnable firmness, outgoing and adventurous.
Valerie Masterson shares the honours with Dame Janet, a... — Gramophone Classical Music Guide, 2010 More…

Act I Scene 1: Grief and woe all hope deny me (Cornelia)

Act I Scene 1: The time for tears is over (Sextus)

Act I Scene 1: Come rouse yourselves to vengeance (Sextus)

Act I Scene 2: You shall be Queen, Cleopatra (Cleopatra, Nirenus, Ptolemy)

Act I Scene 2: Yet why despair? (Cleopatra)

Act I Scene 3: Alas! Reviled and neglected, must I remain here for ever? (Cornelia, Sextus, Cleopatra, Nirenus)

Act I Scene 3: O star of my desire (Cleopatra)

Act I Scene 4: How silently, how slyly (Caesar)

Act I Scene 4: Condemn'd to grieve and cry, my love (Cornelia, Sextus)

Act II Scene 2: He is no son who seeks not full revenge … (Sextus)

Act II Scene 3: Soon he will come to find me (Cleopatra)

Act II Scene 3: They will kill him (Cleopatra)

Act III Scene 1: So! You are beaten! (Ptolemy, Cleopatra)

Act III Scene 1: I shall tame your pride unbending (Ptolemy)

Act III Scene 1: And so in 1 brief hour all my glory is gone? (Cleopatra)

Act III Scene 1: From the perils of the ocean (Caesar)

Act III Scene 3: A vow I give you (Caesar, Cleopatra)

This opera was a personal triumph for Dame Janet. As Caesar, she arms the voice with an impregnable firmness, outgoing and adventurous.
Valerie Masterson shares the honours with Dame Janet, a Cleopatra whose bright voice gains humanity through ordeal. The tinkle of surface- wear clears delightfully in her later arias, sung with a pure tone and high accomplishment.
As a total production, Julius Caesar was an outstanding achievement in ENO's history.
Strongly cast, it had a noble Cornelia in Sarah Walker, a high-spirited Sesto in Della Jones, and in James Bowman a Ptolemy whose only fault was that his voice lacked meanness of timbre appropriate to the odious character. John Tomlinson's massive bass also commands attention.
Mackerras's conducting is impeccable and the opera is given in clear, creditable English.
(See next review for the video equivalent.)

the ravishing accompaniments to the two big Cleopatra arias amply justify the use by the excellent ENO orchestra of modern rather than period instruments...The full, vivid studio sound makes this one of the very finest of the invaluable series of ENO opera recordings in English.