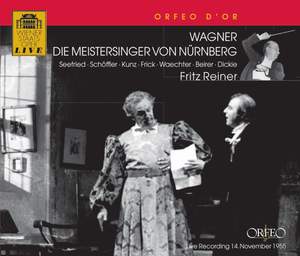 The heavily bombed State Opera House in Vienna reopened on November 5, 1955, with a performance of Fidelio. Die Meistersinger, the Viennese favourite, followed in a new production and was the... — Gramophone Classical Music Guide, 2010 More…

The heavily bombed State Opera House in Vienna reopened on November 5, 1955, with a performance of Fidelio. Die Meistersinger, the Viennese favourite, followed in a new production and was the occasion of some disappointment.
Critics blamed the stage production team; Gottfried Kraus, in an authoritative essay accompanying this recording, is inclined to think that the reaction was due rather more to a shock to the system caused by the transference of the opera from the relative intimacy of the Theater an der Wien to the less cosy expansiveness of the new-old house.
As listeners merely, we are hardly affected, instead experiencing a few disappointments of our own. First among these must be the singing of our hero for the evening, the Walther von Stolzing of Hans Beirer. He is sympathetic and objectionable almost by alternation, starting in a warm-toned, naturally colloquial style, then developing a lumpy, graceless, forced manner of utterance: an unlikely candidate for any prize in singing. Reiner's conducting, too, will not be to all tastes, prosaic in the overture, then given to marked rallentandi and some unusually slow speeds in Act 3. More generally, the live recording is not entirely even-handed in its balancing of stage and orchestra, certain areas caught less clearly than others.
Irmgard Seefried is particularly a victim. Sung with character in every phrase, her Eva charms from the first whispered exchanges in church, throughout the great duets and quintet to the awarding of the victory-laurels, but seems smallscale, miniaturised. Of course, as long as they are on stage alongside Gottlob Frick, most voices are likely to sound small. He is the magnificent Pogner of the age, gloriously full and secure, and dealing with the tessitura of 'Das schöne Fest' as if (as the shop-girls say) 'No problem'.
Kunz's Beckmesser is familiar, and does not gain from another hearing. But Paul Schöffler, the undoubted true hero of the evening, is surely here giving the performance of a lifetime. It has all the warmth and understanding we remember from the studio recording but now, with the stage his artistic home and freedom to let movement influence pace, he is newly impressive: in the last act especially, with his deeply moved acknowledgement ('Euch macht ihr's leicht') and the final admonition ('Verrachtet mir'), where he draws on a rich reserve of vocal power and resonance.
This is a recording one would want to have for that alone, though indeed there are other as yet unmentioned attractions such as Murray Dickie's lively, clean-cut David and the sonorous Watchman of Frederick Guthrie. And the flexibility and warmth of Reiner's conducting does have an appeal of its own. Above all, the recording renews joyful contact with the adorable opera. The Viennese of 1955 may have wended their way home a little disappointedly. We, home-listeners half a century later, are likely to retire for the night with a note in our diaries: 'Bounteous Meistersinger, and, so to bed, well content'.

…Paul Schöffler, the undoubted true hero of the evening, is surely here giving the performance of a lifetime. …I like the flexibility and warmth of Reiner's conducting.