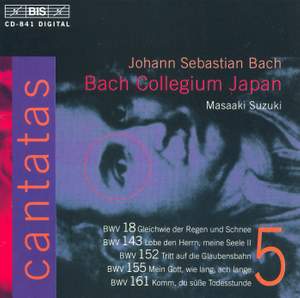 The fifth volume of Bach's sacred cantatas performed by the Bach Collegium Japan continues their Weimar survey with five pieces written between c1713 and 1716. It begins with No 18, performed... — Gramophone Classical Music Guide, 2010 More…

The fifth volume of Bach's sacred cantatas performed by the Bach Collegium Japan continues their Weimar survey with five pieces written between c1713 and 1716. It begins with No 18, performed in its Weimar version – Bach later revived it for Leipzig, adding two treble recorders to the purely string texture of the upper parts of the earlier composition. The scoring of No 152 is more diverse, featuring in its opening Sinfonia a viola d'amore, viola da gamba, oboe and recorder.
A conspicuous feature of No 155 is its melancholy duet for alto and tenor with bassoon obbligato. While the vocal writing sustains something of the character of a lament the wonderfully athletic, arpeggiated bassoon solo provides a magical third voice. The accompanying essay is confused here, emphasising the importance of a solo oboe which in fact has no place at all in this work. No 161 is a piece of sustained beauty, scored for a pair of treble recorders, obbligato organ, strings and continuo.
Bach's authorship of No 143 has sometimes been questioned. Much of it is un-Bachlike, yet at times it's hard to envisage another composer's hand.
The performances are of unmatched excellence.
Suzuki's direction never falters and his solo vocalists go from strength to strength as the series progresses. Suzuki makes a richly rewarding contribution with beautifully poised singing, a crystal-clear voice and an upper range that only very occasionally sounds at all threatened. Mera and Sakurada sustain a delicately balanced partnership in the elegiac duet of No 155, the limpid bassoon-playing completing this trio of outstanding beauty. Kooij is a tower of strength, a sympathetic partner to Suzuki in the dance-like duet between Jesus and the Soul (No 152), and resonantly affirmative in his aria from the same cantata. But the highest praise should go to Mera and Sakurada for their affecting performance in No 161. All the elements of this superb cantata are understood and deeply felt by all concerned. The disc is admirably recorded and, apart from the aforementioned confusion, painstakingly and informatively documented.