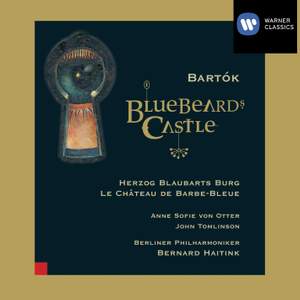 Bernard Haitink's poetic axis is vividly anticipated in the rarely recorded spoken prologue where Sándor Elès bids us search beneath the story's surface. Elès's timing and his sensitivity to word-colouring and the rhythmic inflexions of his native language greet the Gothic imagery of Bartók's solemn opening bars. The main characters soon establish very definite personalities, Bluebeard/Tomlinson as commanding, inscrutable and just a little arrogant, von Otter/ Judith as profoundly frightened but filled with curiosity. Haitink and the Berlin Philharmonic paint a rich aural backdrop that's neither too slow nor overly lugubrious and that shows due appreciation of Bartók's seamless scoring, especially in terms of the woodwind. The disembodied sighs that greet Judith's violent hammering on the first door mark a momentary retreat from the Philharmonie's ambient acoustic (or so it seems) and in so doing suggest – quite appropriately – a chilling 'world beyond'. Judith's shock as she recoils in horror is conveyed in clipped, halting tones by von Otter (note too how seductively she manipulates Bluebeard into opening the first door).
Beyond the expansive introduction come the doors themselves, and here too Haitink balances the 'outer' and 'inner' aspects of Bartók's score to perfection – whether in the torture chamber, the glowing textures of 'The Secret Garden' or the Brucknerian expanses of the fifth door, 'Bluebeard's Kingdom' (the opera's structural apex), launched here on a series of epic crescendos. Von Otter's stunned responses suggest lonely disorientation within a vast space, whereas the sullenness of the 'Lake of Tears' prompts an exquisite blending of instrumental timbres, most particularly between brass and woodwind. Haitink draws an aching curve to the string writing, but when Judith rushes panic-stricken towards the seventh door, fearful of Bluebeard's secret murders, he effects a gradual but cumulatively thrilling accelerando. The internment itself is devastating, while Bluebeard's helpless retreat marks a slow journey back to the questioning void.
Recording live can have its pitfalls, but here the atmosphere is electric, the grasp of Bartók's sombre tone-painting – whether sung or played – absolute.
EMI's engineering favours a full sound stage rather than picking out specific instrumental details, but the overall effect remains comprehensively satisfying.