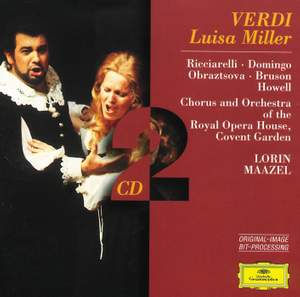 The strength of this DG reissue is the singing of the three principals. The production of LuisaMiller at the Royal Opera House, Covent Garden, on which the set was based, probably marked the... — Gramophone Classical Music Guide, 2010 More…

A brani, a brani, o perfido

The strength of this DG reissue is the singing of the three principals. The production of LuisaMiller at the Royal Opera House, Covent Garden, on which the set was based, probably marked the high point of Katia Ricciarelli's career. Maybe the recording caught her just a year too late, when some harsh sounds had started to intrude in her singing at forte above the stave, but the soft singing remains beautiful and the character is immensely touching. Domingo sings Rodolfo with a voice of metal as firm and glowing as bronze, even if he does not have the poetry of Bergonzi or the flair of Pavarotti. Bruson is heard in one of the best roles in his repertoire: the sympathetic music of the Miller calls for exactly the long, lyrical lines at which he excels, often spanning two phrases in a single breath where the average Verdi baritone would be left gasping.
Howell makes a stately, but not very incisive Walter. Neither Ganzarolli nor Obraztsova had been in the Royal Opera stage production, and the decision to bring them into the cast solely for the recording was not justified by the results.
Obraztsova's thick-voiced Federica is a liability, but the real stumbling-block is Maazel's insensitive conducting. Nevertheless, as a totality, this set remains the equal of any before us at the moment (neither the Cleva/RCA nor Maag/Decca is currently listed).

Though taut in his control, Maazel uses his stage experience of working with these soloists to draw them out to their finest, most sympathetic form. Ricciarelli gives one of her tenderest and most beautiful performances on record.