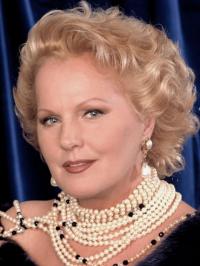 Katia Ricciarelli was born in Veneto in 1946 and trained at the Benedetto Marcell0o Conservatory in Venice; her professional debut took place in Mantua in 1969, as Mimì in La bohème. By the mid-1970s she was in demand at major houses on both sides of the Atlantic, particularly in Verdi and Puccini: key roles included Amelia in both Simon Boccanegra and Un ballo in maschera, the title-roles in Luisa Miller and Aida, Elisabetta in Don Carlos and Desdemona in Otello (which she sings on Franco Zeffirelli’s 1986 film of the opera). She recorded Aida, Elisabetta, Amelia in Ballo and the Requiem for Claudio Abbado, all opposite Plácido Domingo.

Find out more at https://en.wikipedia.org/wiki/Katia_Ricciarelli