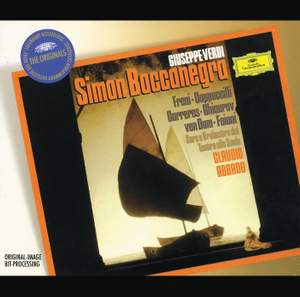 This famous recording has become a classic, a studio performance following a series of performances at La Scala in the Strehler staging. The close, slightly claustrophobic recording exactly mirrors the mood of nefarious activities and intrigues following Boccanegra's rise to be Doge of Genoa, he and his lovely daughter victims of the dark deeds round them. In his plebeian being, clement exercise of authority and warm, fatherly love, Simon Boccanegra is made for Cappuccilli, who, under Abbado's tutelage, sings it not only con amore but with exemplary, delicately tinted tone and unbelievably long-breathed phrasing.
As his daughter Amelia, Freni was just entering her quasi-spinto phase and expands her lyric voice easily into the greater demands of this more dramatic role. Similarly heavier duties hadn't yet tarnished the youthful ardour and sap in the tone of the 30-year-old Carreras. As the implacable Fiesco, Ghiaurov exudes vengeful command, and van Dam evil machinations as the villain Paolo.
Over all presides Abbado in what remains one of his greatest recordings, alert to every facet of the wondrous score, timing every scene, in an opera tricky to pace, to near-perfection, and bringing theatrical drama into the home. This set should be essential to any reputable collection of Verdi.

one of the most beautiful Verdi sets ever made. The playing of the orchestra is brilliantly incisive as well as refined, so that the drama is underlined by extra sharpness of focus...with electrifying choral singing as well, this is a set to outshine even Abbado's superb Macbeth, and it is superbly transferred to CD.