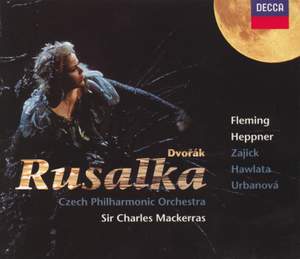 Renée Fleming's tender and heartwarming account of Rusalka's Invocation to the Moon reflects the fact that the role of the lovelorn water nymph, taken by her in a highly successful production... — Gramophone Classical Music Guide, 2010 More…

Renée Fleming's tender and heartwarming account of Rusalka's Invocation to the Moon reflects the fact that the role of the lovelorn water nymph, taken by her in a highly successful production at the Met in New York, has become one of her favourites. Ben Heppner also has a special relationship with the opera, for the role of the Prince was the first he studied in depth as a student. He has sung it repeatedly since then, often opposite Renée Fleming, and both he and Mackerras have long harboured the ambition to make a complete recording.
The joy of this magnificent set, which won Gramophone's Record of the Year 1999, is that in almost every way it fulfils every expectation and more, offering a recording with glowing sound that more than ever before reveals the richness and subtlety of Dvorák's score. As interpreted by Fleming and Mackerras, Rusalka's big aria at the start of Act 3, when having been rejected by the Prince, she seeks consolation in returning to the water, is as poignantly beautiful as the more celebrated Invocation to the Moon in Act 1, when she laments over loving a human. In addition, the climactic moments bring glorious top notes, firm and true up to B flat and B. Heppner, like Fleming, conveys his special affection for this music, unstrained up to top C, combining heroic power with lyric beauty.
Dolora Zajick as the Witch, Jezibaba, is characterful and fruity. Franz Hawlata as the Watergnome, Rusalka's father, is firm and dark, bringing a Wagnerian weight to the role. The engineers also thrillingly capture the off-stage effects so important in this opera, with the Watergnome balefully calling from the lake. Even the smaller roles have been cast from strength, all of them fresh, true and idiomatic. Strikingly, there isn't a hint of a Slavonic wobble from any of the singers.
In the orchestra, too, the Czech horns are consistently rich and firm. And if anyone is worried about having four non-Czech principals, they're as idiomatic as any rivals.
The final glory of the set lies in the warmly understanding conducting of Charles Mackerras.
In every way this matches and even outshines his supreme achievement in the Decca series of Janácek operas. In those you had the Vienna Philharmonic, but here the Czech Philharmonic is both a degree more idiomatic and just as opulent in tone, with superb solo work. The balance between voices and orchestra is well managed, with voices never drowned.

Renée Fleming and Ben Heppner are dream recording voices who have also benefited from the experience of playing the same roles opposite each other on stage in the US. The other singers are well cast, too, and Sir Charles Mackerras and the Czech Philharmonic Orchestra have the music in their blood.

in every way a satisfying musical experience. This offers not only ripely atmospheric sound but what is in almost every way is the ideal cast...Fleming gives a heart-felt, sharply detailed performance, with the voice consistently beautiful over the widest range.

Renée Fleming gives a tender and heart-warming account ... the joy of this set is that it fulfils every expectaton and more, offering a recording with glowing sound that reveals the richness and subtelty of Dvorak's score.