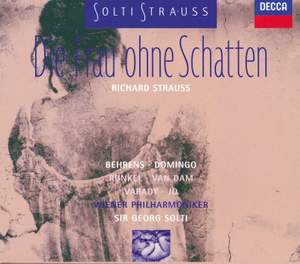 This was the most ambitious project on which Strauss and his librettist Hugo von Hofmannsthal collaborated. It's both fairy tale and allegory with a score that's Wagnerian in its scale and breadth.... — Gramophone Classical Music Guide, 2010 More…

This was the most ambitious project on which Strauss and his librettist Hugo von Hofmannsthal collaborated. It's both fairy tale and allegory with a score that's Wagnerian in its scale and breadth. This Solti version presents the score absolutely complete in an opulent recording that encompasses every detail of the work's multi-faceted orchestration.
Nothing escapes his keen eye and ear or that of the Decca engineers. The cast boasts splendid exponents of the two soprano roles. Behrens's vocal acting suggests complete identification with the unsatisfied plight of the Dyer's Wife and her singing has a depth of character to compensate for some tonal wear. Varady gives an intense, poignant account of the Empress's taxing music. The others, though never less thanadequate, leave something to be desired.
Domingo sings the Emperor with vigour and strength but evinces little sense of the music's idiom. José van Dam is likewise a vocally impeccable Barak but never penetrates the Dyer's soul. Runkel is a mean, malign Nurse as she should be, though she could be a little more interesting in this part. It benefits from glorious, dedicated playing by the VPO.

Hildegard Behrens' voice has rarely sounded so beautiful on record. The Vienna Philharmonic surpass themselves ... this superb recording is unlikely to be matched, let alone surpassed, for many years. Solti himself is inspired throughout.

Die Frau ohne Schatten includes some of the most demanding vocal roles that Strauss ever wrote, and Georg Solti's cast are more than up to the task: Hildegard Behrens as the Dyer's Wife and Julia Varady as the Empress dominate, but I chose this recording for the casting of Plácido Domingo as the Emperor. He certainly won't be to everyone's taste in this music, but personally I just revel in the sumptuous singing he treats us to!