Recording of the Week,  The Tallis Scholars perform two Masses by Josquin

Most of us are probably familiar with aleatoric music, where elements of random chance are incorporated into the composition or performance of a piece. The term is mostly associated with the American twentieth century, with composers such as Charles Ives, Henry Cowell, Alan Hovhaness and particularly John Cage all exploring the potential of this radically different approach, not to mention Karlheinz Stockhausen and the late Pierre Boulez in Europe. 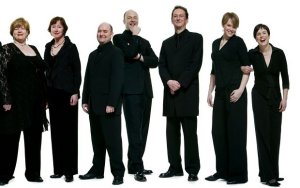 Peter Phillips and members of The Tallis Scholars

This week’s disc, though, suggests the tantalising possibility that the Americans were beaten to it by nearly half a millennium, by none other than Josquin des Pres. The music of his Missa di dadi – literally, the Dice Mass – may have been partly determined by the rolling of dice, and was almost certainly influenced by the gambling-obsessed society and ducal court of late fifteenth-century Milan in which he worked.

Based on a popular chanson of the time, each movement is headed by an illustration of a pair of dice, which indicate by what ratio the chanson melody needs to be slowed down to fit with the other parts. Most fascinatingly of all, it’s been speculated that Josquin, when he was starting the composition of this mass, may have used dice-rolls to determine these ratios before then composing the other parts to fit. Curiously, the dice illustrations disappear partway through the mass – at exactly the same moment as the liturgy changes mood and the most sacred part of the service begins. It’s been suggested that there is a moral hidden here: that the lure of earthly vices can, or should, pale in comparison to the faith that the mass enacts. Nobody can say for sure, though the chanson’s title, N’aray je jamais mieulx? – translated as “Shall I never have better than I have?” – does point to a double meaning, referring equally to the gambler’s anxiety about their winnings and to the devout believer’s prospect of reward and comfort in Heaven.

Josquin may or may not have rolled the dice to set the tempo of his various cantus firmi, but the Tallis Scholars leave nothing to chance in their performance. The same meticulous control, peerless balance and blend and sensitivity to line are on display here as in their other recordings; every time I listen to them I am reminded of why they have such a reputation for quality. It was the Tallis Scholars’ performances that first made me realise how early music could sound, and this disc is no exception. Josquin’s two masses – the Dice Mass and the Missa Une mousse de Biscaye, the latter based on a folksong about a young Francophone man’s unsuccessful wooing of an uncomprehending Basque girl (the mysterious “mousse” is a corruption of the Castilian “moza” meaning “lass”) – are both rich and sumptuous in sound.

The second mass on the disc is in fact the earliest-known of Josquin’s masses, dating from the mid-1470s. As one might expect of an early work, particularly by such an innovative composer, it displays some quirks, such as an unusually long, fantasia-like Credo and thematic links between the Kyrie and Agnus (a rarity in Josquin’s time). Such scholarly curiosities aside, Josquin’s style is already very much recognisable in this early work. In all his various mass settings, he continually experiments with the potential offered by the form, and this pair of magnificent works are just two examples among many of his insatiable musical curiosity.

One of the Tallis Scholars’ main goals is the popularising of music of this kind to a wider audience, and I suspect very few people have heard of either of these two masses. I promised myself I would resist the temptation to make gambling-related puns, but if you don’t think you like Josquin then I think you could do a lot worse than to take a chance on this album – two beautifully constructed, originally conceived and flawlessly performed masses that unveil layer after layer of their intricate part-writing with each listening. I would hesitate to call him “easy listening” but there is something about Josquin’s music that is wonderfully undemanding to the listener; there are no searing climaxes and no depths of anguish, but simply a constant, assured serenity. 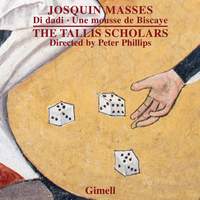