For over a decade the Tallis Scholars have been working their way through the varied and inventive Mass settings of Josquin des Prez, arguably the greatest composer of the early Renaissance. This project now nears its completion with the release of the last volume but one.

The Tallis Scholars revel in Josquin's Missa Mater Patris, in which he not only borrows freely from Antoine Brumel but seems in many ways to let himself off the leash to compose as he pleases (in a manner reminiscent of Rossini's Péchés de vieillesse); this is paired with the Missa Da pacem - a work formerly attributed to Josquin, then assigned to Noel Bauldeweyn, then considered by some to be a mixture of both, and generally hotly disputed in all directions by scholars of the period.

I spoke to Peter Phillips to try and unravel some of these riddles...

You mention that this is the only Mass in which Josquin quotes another composer’s material – extensive borrowings from Antoine Brumel, possibly as a tribute shortly after his death. Would other composers of the period have considered this normal, or did the decision to adapt large chunks of a contemporary’s music break new ground?

Not if the borrowing was of chunks, big or small, rather than the whole piece note-for-note. Parodying a motet or madrigal by another composer was standard practice – Josquin did it to Ockeghem, and Palestrina did it to Josquin. But parodying involved quoting chunks, broken up. In Mater Patris Josquin took the entire motet by Brumel, and swallowed it whole, with not a note changed except that he added two parts of his own. So far as I know, that is unique. It is certainly quite extraordinary in effect.

The second mass on this recording, the Missa Da pacem, is now attributed at least in part to Noel Bauldeweyn; you comment that it’s possible to tell his handiwork from Josquin’s simply by the quality of the writing, and even identify which movements were written by which composer. Isn’t it courting controversy to base authorial attributions on such subjective criteria?

Yes, and I hope I didn’t say it as forthrightly as that. What I think I said is that some of it - two passages, one of which was identified as long ago as 1868 by the great Austrian musicologist August Wilhelm Ambros - is so good that one wonders, if the same composer wrote the whole setting, why he didn’t maintain something like that standard throughout. The variation of standard is quite unusually wide. One rather romantic explanation is that it was a workshop job, in the way that painters of that period handed over the less significant details of their commissions to employees. However, there is no evidence that composers did this, and every responsible academic I have consulted rejects it. We recorded the mass because for 250 years it was thought to be quintessential Josquin – the best anyone knew. Now it has been proved not to be by him at all. I wanted to find out from the inside why knowledgeable people thought it was great Josquin. The answer is ambiguous.

One of the most striking moments on the whole recording is the Hosanna of the Missa Mater Patris, with that unmistakeable motif of parallel chordal melismas repeated at several different pitches in a way that almost seems to prefigure the Alliluyas of Rachmaninov’s Vespers! Is there anything else like this elsewhere in Josquin’s writing?

I know what you mean by those Alliluyas - they mean a lot to me. And indeed there is a resemblance, rather a nice one. I doubt Josquin did quite this again. To repeat a motif - the ‘exaudi’ motif from the motet - in every bar of the 46 in question, at every available modal pitch, was probably a one-off; but you never know.

In the third Agnus Dei of the same mass, the Brumel motet is adopted almost wholesale, embellished with two original parts written by Josquin – one above and one below – which expand the texture and in places put a different spin on the harmony. Are you aware of any other composers of the period taking a similar approach to external borrowings?

I think I answered this, as far as I could, in the second question above. But no, not as total as this.

Looking a little further ahead… this is the penultimate release in your Josquin cycle. Do you have another major project lined up once the final volume has been completed?

Yes, we have already recorded a second disc of music by John Sheppard, which includes his Missa Cantate; and soon we shall make a disc of big pieces – antiphons by Tallis, Taverner, Fayrfax, Sutton and Lambe, to include Tallis’s Gaude gloriosa. 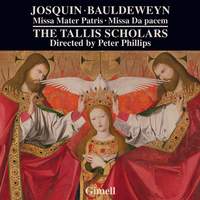 The Tallis Scholars' Josquin cycle nears its completion with this penultimate volume, released on 1st November 2019.