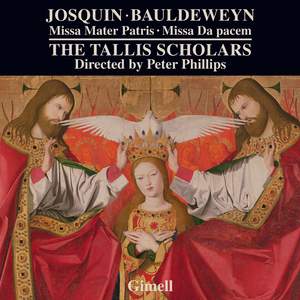 The Scholars take [the Missa Mater Patris] at an aptly reverential tread, capturing its introspective – at times hypnotic – qualities…The Scholars realise [the Bauldeweyn] with all the precision,... — BBC Music Magazine, December 2019, 5 out of 5 stars More…

“Our project to record all of Josquin’s Masses now runs into controversy. One of Josquin’s greatest compositions, Missa Mater Patris, is so unusual that some scholars have questioned its authorship. With Da pacem these questions become more pressing. Having been thought during the 19th century to be the most typical and perfect of all Josquin’s Masses, it has recently been shown to be by the little-known Noel Bauldeweyn. Or is it?” (Peter Phillips)

The Scholars take [the Missa Mater Patris] at an aptly reverential tread, capturing its introspective – at times hypnotic – qualities…The Scholars realise [the Bauldeweyn] with all the precision, clarity and conviction for which they are justly renowned.

...this disc is indispensable to your collection

Phillips’s albums with The Tallis Scholars continue to sparkle and inform...There are several outstandingly well-controlled spans of two-voice polyphony. Listen especially for the way these singers glide through the exotic chord-chains in the Sanctus: I can’t help but be reminded of the confident sweep of the Andrews Sisters. This is glorious stuff indeed.

A mandatory and self-recommending purchase for everyone who has been following the series.

As always with this group, the Tallis players perform with a graceful breadth.