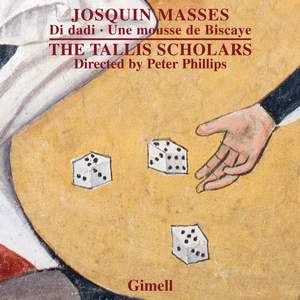 Recording of the Week,  The Tallis Scholars perform two Masses by Josquin

David listens to the Tallis Scholars' new double-bill of Josquin masses, including the mysterious and unorthodox 'Dice Mass'.

There are various theories as to why pictures of dice are included in the score of Josquin's Missa Di dadi. At first sight the dice are nothing more than indicators to the tenors as to how to distribute the notes of the chanson, on which the Mass is based, into their part. For example the Kyrie is preceded by a pair of dice showing two and one, which tells the singers that the note-lengths of the chanson need to be doubled in order to fit with the other three voice parts. In the Gloria the dice read four and one, requiring the notes of the chanson to be quadrupled in length.

Josquin is likely to have written the Mass in Milan in the late 15th Century which is known to have been a hot-house for gambling. Perhaps the dice are there simply to amuse a wealthy patron or confuse the singers. Other explanations have turned to the text of the chanson: "Shall I never have better than I have?" Is it a gambler's gripe? Or a lover's complaint? Or is it the languishing soul's plea for redemption?

Perhaps Josquin simply threw dice to establish his compositional scheme. Whatever the answer, the reason for the dice seems to be important. When Petrucci published the Missa Di dadi in 1514 he included the dice even though the tenor part is resolved and printed in full.

"Can Great Music be inspired by the throw of dice? The possibility clearly excited Josquin, who prefaced the tenor part in several of the movements of his Missa Di dadi with a pair of dice" Peter Phillips

This is glorious music.

Both works are magnificent achievements, beautifully sung…the Tallis Scholars approach the two works in entirely different ways, treating the Missa Di dadi in a much gentler manner, with extended passages allotted to solo voices, whereas the Missa Une mousse de Biscaye gets a much more robust performance

Another fine success in The Tallis Scholars’ wonderful Josquin series.

Josquin may or may not have rolled the dice to set the tempo of his various cantus firmi, but the Tallis Scholars leave nothing to chance in their performance. The same meticulous control, peerless balance and blend and sensitivity to line are on display here as in their other recordings; every time I listen to them I am reminded of why they have such a reputation for quality.

The Tallis Scholars’ accounts of these devout, elegant works are beautifully blended and paced.

As ever this revered group, in the latest in their all-Josquin series, spins and weaves the long vocal lines faultlessly.

Why bother to review a new recording from the Tallis Scholars? You know just what you’ll find - damn near perfection in tuning, balance, phrasing, blend, pacing, dynamic range - and anything else you care to mention.

After 43 years Peter Phillips and the Tallis Scholars remain at the top of their game. They bring such lovely control, pacing, harmonies and textures...an especially fine recording [and] a very fine addition to the Tallis Scholars’ remarkable catalogue