Musicologist and conductor Owen Rees has contributed much to our understanding of the Golden Age of Spanish and Portuguese polyphony - an era that's often thought about in terms of heady, passionate harmonic turns and emotional outpourings. But as his latest album with his early music consort Contrapunctus reveals, this period was also one that looked back to its own past for inspiration, with many composers of the period holding their French predecessor Josquin in the highest esteem and incorporating his musical ideas into their own works.

I spoke to Owen about how Josquin's legacy developed through the generations, and about some of the less well-known works recorded on this album.

As with any “themed” album, there’s an immediate curiosity about where the germ of the concept first came from. What led you to investigate tracing Josquin’s legacy in Spain?

Most of my career as a musicologist has been devoted to Iberian music, and what’s always fascinated me are the chains of influence linking composers, often across national borders as well as across generations. The strength of Josquin’s reputation in Spain has long been recognised in academic circles, but this album takes the opportunity to reveal his Spanish influence to a wider audience, and perhaps in a more immediate way, through the works of the three principal ‘golden age’ composers. The specific Josquin influence that this recording explores is a compositional technique, ostinato (periodic repetition of a musical idea throughout a piece), and so whereas many recordings of Spanish polyphony focus on ‘mysticism’, here our emphasis is on the skill and craft of these composers, and on their internationalism.

We often tend to think of the concept of a classical “canon” as essentially beginning with Mendelssohn’s revivals of Bach, but you mention anthologies of Josquin’s music being published and widely disseminated, creating a miniature craze. Where did this sixteenth-century interest in what was by then already “early” music spring from?

The international ‘Josquin craze’ was certainly aided by the new technology of music printing: Josquin was favoured above any other composer by the pioneer of music publishing, Petrucci. But beyond this, Josquin benefited from the sixteenth-century humanistic tendency to elevate particular figures to the status of ‘authorities’ in the arts and poetry, for example, and many anecdotes from the period show that Josquin was placed on a pedestal in this way in the decades following his death. Such was the value attached to his authorship that many works were passed off as his: one German music publisher recounts the quip that ‘now that he is dead, Josquin is putting out more works than when he was alive’.

You’ve assembled this programme around the influence of Josquin on his Iberian successors. Is there any evidence that other composers of Josquin’s era (or even earlier) enjoyed a similar revival of interest in their work at the same time, and maybe a similar influence on posterity?

In Josquin’s case, it wasn’t really a ‘revival’, as his music continued in fashion from the time of his death through the rest of the sixteenth century. Obviously, the sixteenth-century composer who – by a long way – has had the most influence over European musical culture in subsequent centuries in Palestrina, whose style came to be treated as an ideal model for how to write vocal counterpoint in the ‘old style’ (stile antico).

The first work on this album, Jubilate Deo, is one of those hyper-specific pieces that is closely tied, by its very text, to one particular moment in history (in this case an abortive peace treaty between France and the Holy Roman Empire). Doesn’t that make it effectively a dead work, suitable only for performance as a historical curiosity?

In one sense, yes, in that (for example) it would be a strange work to sing liturgically these days: there aren’t many situations which call for a piece of music to praise rulers called Paul, Francis and Charles! But historical objects aren’t of less value to us – and their impact on us isn’t lessened – just because they spring from a very specific context: think of Jan van Eyck’s Arnolfini Marriage portrait, or the painting of The Field of the Cloth of Gold recording a similar diplomatic event to Morales’s motet: the meeting of Henry VIII and the same King Francis of France. In such cases as these or Morales’s Jubilate Deo, we can choose either just to enjoy the powerful work of artistry, or also to enrich our appreciation of it through knowledge of its origins. And this motet went on to inspire works such as Victoria’s Missa Gaudeamus which are definitely still ‘useful’ for liturgical performance.

Proportionally, there’s a lot of Marian music included here; three Salve Reginas and the motet Ave virgo sanctissima. Is that representative of the time – was there a strong tradition of particular veneration of Mary in Golden Age Spain?

It’s certainly representative of the time throughout Catholic Europe: Mary’s status as the mediator between believers and Christ made her a central object of veneration and prayer, particularly from the later Middle Ages onwards, and music was regarded as adding to the efficacy of such praise and prayer. Salve regina was the most famous of these sung prayers, and it’s not surprising that Victoria left us no fewer than four settings of it. But it’s also true that devotion to Mary was particularly strong in the part of Spain where Francisco Guerrero worked, and that he was famed for his Marian works, being dubbed ‘the singer of Mary’. Of these works, the most famous in his lifetime as now was the motet Ave virgo sanctissima which we include on the recording. 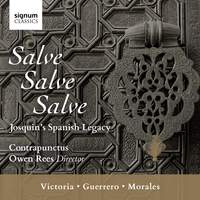