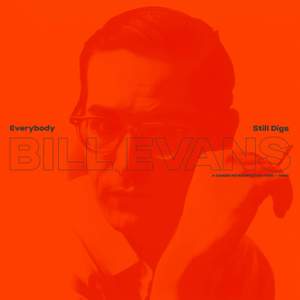 There’s a huge amount of good music here, as indeed there should be from a compilation covering a quartercentury. — Jazzwise, June 2021, 4 out of 5 stars

Earl Zindars: How My Heart Sings

Evans, B: Re: Person I Knew

Loesser: I Believe In You

Evans, B: Turn out the Stars

Evans, B: Walkin' Up

Noble, Ray: The Touch of Your Lips

Churchill: Some Day my Prince Will Come

Raksin: The Bad and the Beautiful

Evans, B: Remembering the rain

Evans, B: Letter to Evan

A Face Without A Name

Noble, Ray: The Touch of Your Lips

Porter, C: I love you

Kern: Up With The Lark

Schwartz, Arthur: You and the Night and the Music

Jones, T: A Child is Born

Leo Robin, Jerome Kern: Up With The Lark

The first-ever career-spanning retrospective (1956–1980) – 5 CDs with repertoire from the Riverside, Fantasy, Verve, and Warner years. Includes the previously unreleased concert ‘On A Friday Evening’ recorded live at Oil Can Harry’s in Vancouver, BC on June 20, 1975, featuring Jazz legends Eddie Gomez on bass and Eliot Zigmund on drums.

The expansive set also includes a previously unreleased live performance from 1975, captured at Oil Can Harry’s in Vancouver, B.C. This recently unearthed concert recording will also be issued as a standalone album titled On a Friday Evening, which will be available on 2-LP, CD and digital formats, including hi-res 192/24 and 96/24.

There’s a huge amount of good music here, as indeed there should be from a compilation covering a quartercentury.