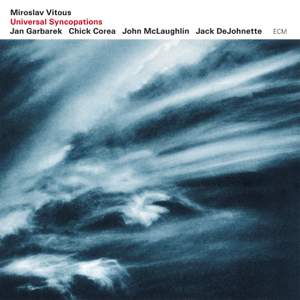 Infinite surge! Miroslav Vitous, the great bassist and Weather Report founding member, with an extraordinary cast of old friends, musicians who have changed the course of jazz, in an exciting album that is at once timeless and contemporary.When Vitous and producer Manfred Eicher first began discussing this project – Miroslav’s first ECM recording in a decade – one of the conceptual models was the bassist’s very first leader date, 1969’s “Infinite Search”. That historic landmark was long regarded, especially by musicians, as one of the crucial documents of the era. “Universal Syncopations” embodies the spirit of that time without being in any sense nostalgic. The new disc seems to make an ellipsis, continuing where “Infinite Search” left off, picking up the story. The central characters are now mature musicians, yet the purity of the playing remains its most striking characteristic. It retains, thanks to Vitous’s compositions and concept, the freshness of discovery. This is the quality that links the album to an era when music was the only “agenda”, before the speculative dawn of so-called fusion music, to a time when the protagonists were all still in the process of finding their voices.