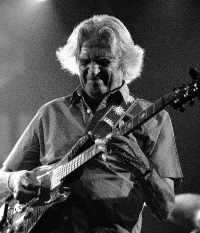 John McLaughlin is an English guitarist, bandleader, and composer. A pioneer of jazz fusion, his music combines elements of jazz with rock, world music, Indian classical music, Western classical music, flamenco, and blues. After contributing to several key British groups of the early 1960s, McLaughlin made Extrapolation, his first album as a bandleader, in 1969. He then moved to the U.S., where he played with Tony Williams's group Lifetime and then with Miles Davis on his electric jazz-fusion albums In a Silent Way, Bitches Brew, Jack Johnson, and On the Corner. His 1970s electric band, the Mahavishnu Orchestra, performed a technically virtuosic and complex style of music that fused electric jazz and rock with Indian influences.

The veteran jazz fusion guitarist offers his take on the 'lockdown album', recorded with a hand-picked selection of international musicians.

Jaco Pastorius, Tony Williams and John McLaughlin's incredibly short-lived collaboration, Trio of Doom, was almost too good to be true. The sole commercial recording of this trio of amazing musicians makes for both a great listen and an intriguing snapshot of a week in each player's lives.