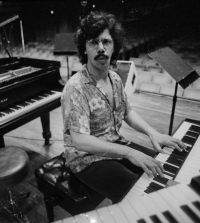 Armando Anthony "Chick" Corea was an American jazz composer, keyboardist, bandleader, and occasional percussionist. His compositions "Spain", "500 Miles High", "La Fiesta", "Armando's Rhumba" and "Windows" are widely considered jazz standards. As a member of Miles Davis's band in the late 1960s, he participated in the birth of jazz fusion. In the 1970s he formed Return to Forever. Along with McCoy Tyner, Herbie Hancock, and Keith Jarrett, Corea is considered one of the foremost jazz pianists of the post-John Coltrane era.

Corea continued to collaborate frequently while exploring different musical styles throughout the 1980s and 1990s.

Chick Corea's classic fusion-meets-Latin jazz album is still a gem of the 70's jazz scene. Eschewing the darker and more impenetrable sounds of his fusion contemporaries, this record from the late master pianist is a truly evergreen listen.

Chick Corea brings a lifetime of musical influences, and elements of game playing, to these brilliant live recordings, with the audience very much part of the act.