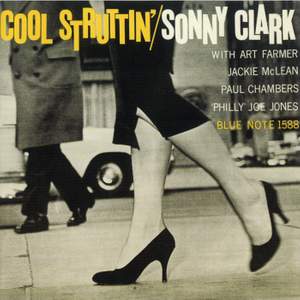 One of the many products of an incredibly fruitful period for Sonny Clark, Cool Struttin' is one of the best works from the pianist whose life was sadly cut short.

Conrad Yeatis Clark, otherwise known as Sonny Clark, was in many ways the quintessential hard bop pianist. Possessed of an enviable lyrical flow and a wealth of inventive melodic ideas that unfurled with clarity and without fuss, Clark had a deeply rooted feeling for the blues.

After moving from his hometown of Pittsburgh to New York, Clark emerged as a ubiquitous presence on Blue Note starting in 1957. It was on his fifth Blue Note date as a leader that Clark arrived at his masterwork, Cool Struttin’, recorded in January 1958 with a top-shelf quintet featuring Art Farmer on trumpet, Jackie McLean on alto saxophone, Paul Chambers on bass, and ‘Philly’ Joe Jones on drums. The album has only grown in stature as a timeless hard bop classic since Clark’s premature death at age 31 in 1963.