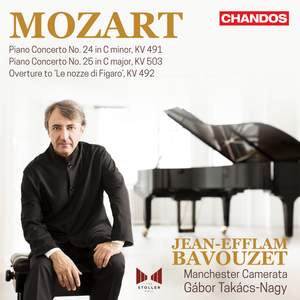 Volume 7 of Jean-Efflam Bavouzet’s Mozart piano concertos survey with Gábor Takács-Nagy and the Manchester Camerata features two of the late concertos – Nos 24 and 25 – along with a spirited reading of the Overture to Le nozze di Figaro (The Marriage of Figaro). Concerto No. 24 was written whilst Mozart was busily composing Le nozze di Figaro, between October 1785 and the première, in Vienna, in May 1786. One of only two piano concertos in a minor key, this extraordinary work possesses many unusual features, including the deliberately ambivalent tonality of the opening melody, which uses all twelve tones of the scale (a pre-echo of serialism??!). Concerto No. 25 was probably first performed, in Vienna, in December 1786, and was certainly a success as there were many repeat performances in the following years (probably including one by Beethoven, in 1795). The disc was recorded in Manchester’s Stoller Hall, Bavouzet playing a Yamaha CFX nine-foot Concert Grand Piano.