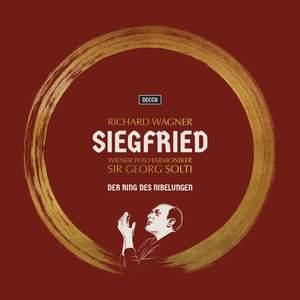 For these new editions, a decade since the last remastering, a completely new set of high-definition 24 bit/192kHz transfers of the original master tapes have been utilized.

Each opera is presented in new deluxe editions—on half-speed vinyl and hybrid SACD—with lavish booklets including rarely seen session photographs, facsimiles of original conductor & producer scores and previously unpublished and newly-discovered curios from the sessions, as well as synopses and libretto (DE/EN)

Solti and the legendary Decca producer John Culshaw assembled the dream cast, the best possible Wagnerian voices of the day. A top star in every role, no matter how small. Among them: George London & Hans Hotter as Wotan, Birgit Nilsson as Brünnhilde, Wolfgang Windgassen as Siegfried, James King as Siegmund, Régine Crespin as Sieglinde, Dietrich Fischer-Dieskau as Gunther, Kirsten Flagstad (!) as Fricka in “Das Rheingold,” Christa Ludwig as Fricka in “Die Walküre” and as Waltraute in “Götterdämmerung,” Lucia Popp as Woglinde, Gwyneth Jones & Brigitte Fassbaender as Rheinmadens and Joan Sutherland (!) as the Woodbird.

While Solti was the mastermind behind the musical interpretation, this massive undertaking would not have been greeted with such unprecedented enthusiasm and rave reviews were it not for the skill Decca’s Culshaw–Parry dream team: producer John Culshaw and engineers Gordon Parry, James Brown & James Lock. They were crucial in making Wagner’s instructions a reality. Culshaw remarked “It is precisely because the work is so huge and demanding that one should not pass lightly over any detail.”

Culshaw’s rival at EMI, Walter Legge remarked “A beautiful work but you won’t sell fifty copies”… how wrong he was: Since the first release, the recording has sold over 9 million units !Each deluxe Vinyl & SACD release comes with an extensive booklet including:

Introductions to each opera by John Culshaw

Original session photographs, facsimiles of Solti’s and Culshaw’s scores, and previously unpublished and newly-discovered curios from the sessions

*Mastering to lacquer at half-speed has the advantage of halving the high-frequency energy passing through the cutterhead, producing a cleaner and more precise top-end of the audio spectrum due to a more accurately etched groove. The cleaner top-end results in a more detailed and stable stereo image and lifelike soundstage.