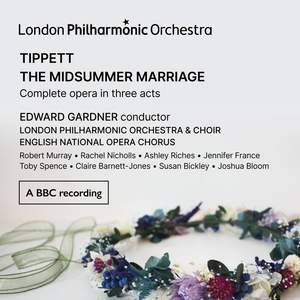 Unexpectedly, it’s the second pair of lovers, Bella and Jack, admirably sung by Jennifer France and Toby Spence, who capture your ear...It’s the villain who almost steals the show. Ashley Riches... — BBC Music Magazine, November 2022, 5 out of 5 stars More…

Returning to the earth is cruel

Is it so strange…

You, you who were with me when she left me

See by a heavenly magic…

We are the laughing children

Crying as they're flying and this is what they say

I'll lay the baby to my breast and rock it

Come within the shadow of the wood

Who hopes to conjure with the world of dreams

I alone, cannot consult myself

You who consult me should never, [never,] doubt me

I see a meadow, fragrant with flowers

Powered by hope and glowing with an irrepressible life- force, Tippett’s The Midsummer Marriage burst like a huge, colourful blossom into the grey world of post-war British music.

There’s still nothing quite like it, and it’s all told in some of the most deliriously beautiful music ever written in these isles.

Recorded at the Southbank Centre’s Royal Festival Hall and broadcast live on BBC Radio 3, this performance was a thrilling start to Edward Gardner’s tenure as Principal Conductor of the London Philharmonic Orchestra.

Unexpectedly, it’s the second pair of lovers, Bella and Jack, admirably sung by Jennifer France and Toby Spence, who capture your ear...It’s the villain who almost steals the show. Ashley Riches is chilling as King Fisher, a bully and a slave to his own dark ego. For all that, this is Edward Gardner’s show, and he rises to Tippett ’s challenge superbly.