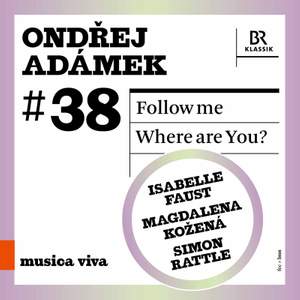 Offer, Ondřej Adámek: Musica Viva: Follow Me; Where Are You?

Adamek: Where Are You?

I. Slotha - Setting a Trap for Divine (Live)

III. Peter Sent Me Back (Live)

IX. You Are Not Here (Live)

"Born in Prague in 1979, the composer, conductor and chorus master Ondřej Adámek, who studied in his Czech hometown and in Paris, has already won numerous prestigious awards for his orchestral, chamber, vocal and electro-acoustic music. In his musical language, which also repeatedly incorporates elements of distant cultures, he creates unusual musical narratives. He seeks the authenticity of his interpretations by combining voices and movements, gestures and theatricality, phonetic and semantic aspects, and his own specially developed musical instruments.The premieres of Ondřej Adámek's 'Where are You?' and 'Follow me' were distinctive for their excellent casts, featuring stars such as Magdalena Kožená, Isabelle Faust and Simon Rattle; the portrait CD is due to be released by BR-KLASSIK in the musica viva series on January 21, 2022. In Adámek’s 'Follow me', a three-movement concerto for violin and orchestra, the melodies are divided between the soloist and the orchestra along the lines of the late medieval hocket technique, whereby the composer seeks to connect a single individual with a (human) crowd. The first performance of Adámek’s 'Where are You?' for mezzo-soprano and orchestra was an outstanding event in Munich's concert programme this year. In the eleven-part, approximately 35-minute-long kaleidoscope of sound, dominated by constant motoric movement – ranging from everyday sounds such as the monotonous ticking of a clock to the sweeping, electrifyingly rhythmic pounding of the orchestra tutti – the composer embarks on a search for the human ('Where do we come from and where are we going?') and the divine. The CD edition of the Bavarian Radio concert series 'musica viva', which began in 2000, has been continued since autumn 2020 together with BR-KLASSIK. On the occasion of the 75th anniversary of 'musica viva' (the concert series was founded by Karl Amadeus Hartmann in 1945), recordings with works by the contemporary composer Rebecca Saunders (*1967) and the composer Enno Poppe (*1969) appeared as first releases in October 2020. All the recordings feature live recordings made at 'musica viva' concerts with the Bavarian Radio Chorus, the Symphonieorchester des Bayerischen Rundfunks, and renowned soloists."