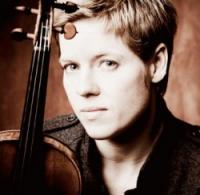 German violinist Isabelle Faust was born in Esslingen in 1972 and studied with Dénes Zsigmondy and Christoph Poppen (with whom she subsequently recorded the Bach Double Concerto under Helmuth Rilling); early successes included first prizes at the 1993 Paganini Competition in Genoa in 1993. Four years later she won Young Artist of the Year at the Gramophone Awards for her recording of Bartók’s violin sonatas on Harmonia Mundi, with whom she has made three dozens albums. Her discography includes award-winning accounts of the complete Mozart violin concertos with Il Giardino Armonico and Giovanni Antonini (Gramophone’s Recording of the Year in 2017), the Beethoven and Berg concertos with Orchestra Mozart and Claudio Abbado, Beethoven piano trios with Alexander Melnikov and Jean-Guihen Queyras, the Bartók concertos with the Swedish Radio Symphony Orchestra and Daniel Harding, and the complete Beethoven sonatas with Melnikov (‘the most stimulating and fascinating accounts of the Beethoven violin sonatas I have heard in many years’ – BBC Music Magazine).

Recording of the Week,  Stravinsky & Eötvös from Pablo Heras-Casado and the Orchestre de Paris

The Spanish conductor delivers a very Gallic Rite of Spring, whilst Isabelle Faust is bewitched and bewitching on the world premiere recording of Péter Eötvös's 'Alhambra' Concerto.