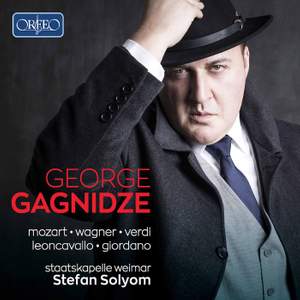 "Georg Gagnidze’s long-awaited debut album Georgian baritone George Gagnidze, characterized by the American opera magazine Opera Now as a “gentle bear of a man,” has been singing around the world since many years and in numerous renowned roles. On his long-awaited debut album he presents celebrated and diverse opera characters: Verdi’s murderous Count di Luna (Il trovatore), the vengeful Renato (Un ballo in maschera), the loyal friend Posa (Don Carlos), the great king Nebuchadnezzar (Nabucco) and – outside the Verdi canon – Andrea Chénier’s revolutionary colleague Gérard, Mozart’s notorious seducer Don Giovanni and Wolfram (Tannhäuser), who pines for the love of Elisabeth. He is accompanied by the Staatskapelle Weimar under the direction of Stefan Solyom."