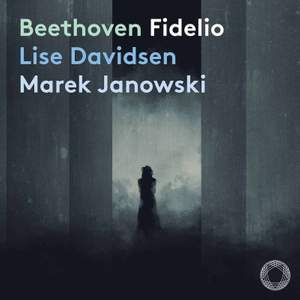 it’s the orchestra which catches attention, with Janowski coaxing heartfelt playing from the strings and above all the horns, who somehow come to signify all that is most hopeful in this great... — BBC Music Magazine, October 2021, 4 out of 5 stars More…

After their acclaimed recording of Weber’s Freischütz, the Dresdner Philharmonie and its Principal conductor Marek Janowski present yet another German opera stereo classic with Beethoven’s Fidelio. They work together with a stellar cast — well-seasoned in German opera — including Lise Davidsen (Fidelio/Leonore), Christian Elsner (Florestan), Georg Zeppenfeld (Rocco), Christina Landshamer (Marzelline), Cornel Frey (Jaquino), Johannes Martin Kränzle (Don Pizzarro) and Günther Groissböck (Don Fernando). This should have been a live concert recording, but Covid-19 frustrated those plans. Luckily, it turned out possible to record Beethoven’s masterpiece in two studio sessions, with two different, established choirs: the Sächsischer Staatsopernchor Dresden, as well as the MDR Leipzig Radio Choir. Katharina Wagner and Daniel Weber have adapted the original dialogues for this recording. Fidelio is the quintessential rescue opera, in which a wife goes to any lengths to free her beloved from the chains of a barbaric, oppressive regime. Beethoven’s opera on the power of love and the enlightening power of humanity still resonates with us today, and its music continues to delight and inspire.

it’s the orchestra which catches attention, with Janowski coaxing heartfelt playing from the strings and above all the horns, who somehow come to signify all that is most hopeful in this great work.

For the general air of professional experience – and much more in the case of the soprano – this set should be heard, although it doesn’t overtake the two Klemperer performances.

Janowski’s conducting is one of the glories of this new studio recording, his slow-burning approach and emphasis on clarity no less involving and ultimately satisfying than the all-guns-blazing fervour of Abbado or a Bernstein. The other is Davidsen’s luminous, vulnerable Leonore, now even more technically secure and nuanced than in her impressive London debut last March.

Davidsen’s lyrical, even girlish timbre and the insights gained from her live run pay dividends here...Janowski is a swift, vital Beethovenian, and the Dresden Opera Chorus sings with breathtaking beauty in the Act I finale.