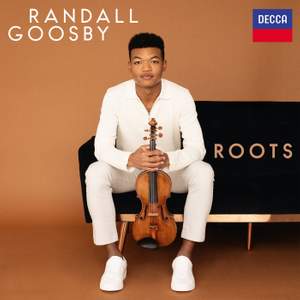 Goosby’s selections reveal him as a quietly lyrical artist with a gift for genre hopping well displayed in the Baroque/blues fusions of ColeridgeTaylor, Perkinson’s Blue/s Forms or Xavier Dubois... — BBC Music Magazine, September 2021, 4 out of 5 stars (Performance) / 5 out of 5 stars (Recording) More…

A Woman Is a Sometime Thing (Arr. Heifetz for Violin and Piano)

It Ain't Necessarily So (Arr. Heifetz for Violin and Piano)

Bess, You Is My Woman Now (Arr. Heifetz for Violin and Piano)

The violinist talks to Katherine about his debut album on Decca, celebrating the influence which Black composers and performers have had on American music from the late nineteenth century to the present day.

'Roots’ is an exploration of the music written by Black composers and inspired by Black culture. A homage to the pioneering musicians who paved the way for Randall and his generation. Looking to the future with a specially commissioned piece by young Black composer Xavier Dubois Foley. World premiere recordings of music by Florence Price that was rescued from an abandoned house over half a century after her death. The Perlman protégé celebrates his own journey and shows young people that music can inspire regardless of background. Produced by 2021 GRAMMY Producer of the Year, David Frost.

Goosby’s selections reveal him as a quietly lyrical artist with a gift for genre hopping well displayed in the Baroque/blues fusions of ColeridgeTaylor, Perkinson’s Blue/s Forms or Xavier Dubois Foley’s Shelter Island, in which violin and double bass spend five minutes hanging loose.

This is selfless, stylish playing which – paradoxically – ends up by projecting the personalities of both artists with even more freshness and warmth.

You only have to hear the way he phrases the first three notes of Summertime to realise this young American violinist is something special, but it’s the less familiar fare that really makes this an album to conjure with: Xavier Dubois Foley’s Shelter Island makes for an irresistible opener, the two Perlman Program alumni riffing off one another with giddy exuberance, whilst Perkinson’s Blues Forms showcases Goosby’s virtuoso chops and distinctive, glassy upper register to perfection.

Goosby’s mentors include Sanford Allen, the dedicatee of Perkinson’s pieces and the first black violinist in the New York Philharmonic, and Itzhak Perlman. You can hear the influence of the latter in the suavity and lushness of his playing, never more so than in the slow middle movement of William Grant Still’s 1943 Suite: Goosby finds a special tone here, soft but vibrant, and the melody soars.