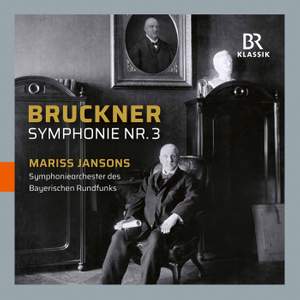 "The Munich concert year of 2005 began at the end of January with two highlights: the two performances of Bruckner's Third Symphony with Mariss Jansons conducting the Symphonieorchester des Bayerischen Rundfunks in the Philharmonie im Gasteig. The live recording makes it possible to experience one of the landmarks of the Late Romantic symphonic repertoire, conducted by an outstanding Bruckner connoisseur. Bruckner completed the score of the opening movement, the Adagio and the Scherzo of his nascent Third Symphony between February and July 1873, and sketched out its finale on August 31, 1873 in Marienbad, Bohemia. The composer then travelled to Bayreuth, and presented Richard Wagner with his Second Symphony and the already completed manuscripts for the Third. Bruckner asked Wagner to select the symphony he preferred, intending to dedicate it to him - but since both men drank quite a bit of beer during their thorough perusal of the manuscripts, Bruckner was later unable to remember which work Wagner had ultimately chosen, and this had to be clarified in writing. The Third Symphony was completed on December 31, 1873."