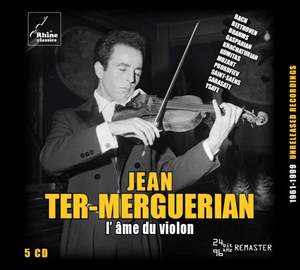 Gasparian: Sonata for Violin and Piano

A 5CD box set of performances given by violinist Jean Ter-Merguerian including some released for the first time. Jean Ter-Merguerian received t the Premiere Prix at the Marseille Conservatoire at the age of 11 in the violin class of Gabriel Rey. On May 18, 1947 took place his debut as soloist with Vivaldi Concerto in A minor and Mendelssohn Concerto in E minor with the Orchestre du Conservatoire under the baton of André Audoli. In the same year his family immigrated to Soviet Armenia Republic, where he continued his musical studies in Yerevan with Karp Dombayev and then at the Moscow Conservatory in the class of David Oistrakh.