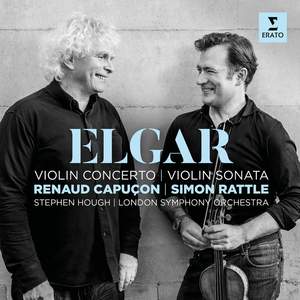 Accuracy matters, and violinist Renaud Capuçon has it in abundance..He is, though, much more than a technical sharp-shooter...Taken whole, this generous, richly enjoyable disc is an easy recommendation... — BBC Music Magazine, May 2021, 4 out of 5 stars More…

The French violinist talks to Katherine about recording the Violin Concerto and Sonata with Sir Simon Rattle, the London Symphony Orchestra, and Stephen Hough.

Elgar’s violin concerto – distinctively passionate and nostalgic – is one of the great late-Romantic concertos. “It is a huge piece,” says Renaud Capuçon “both in terms of its length and its romantic and noble nature.” This is Capuçon’s first recording with Sir Simon Rattle, here conducting the London Symphony Orchestra. When Rattle chose Elgar’s Enigma Variations for his inaugural concert as the LSO’s music director in 2017, he was celebrating the close historic links between the composer and the orchestra. Not only did the LSO accompany Fritz Kreisler in the premiere of the violin concerto in 1910, Elgar became its Principal Conductor the following year. Paired with the concerto on this album is his violin sonata, first performed in 1919. Renaud Capuçon, who calls the sonata “a work of nobility and tenderness”, is joined by one of the leading British pianists of today, Stephen Hough.

Accuracy matters, and violinist Renaud Capuçon has it in abundance..He is, though, much more than a technical sharp-shooter...Taken whole, this generous, richly enjoyable disc is an easy recommendation for either seasoned Elgarians or complete newcomers to his music.

Capuçon’s interpretation is undoubtedly an exceptional one in its affection and sympathy for the long, plangent lines of Elgar’s score; it is also a reading intensified by the empathetic support and élan of Rattle and the LSO.

Only a handful of non-Brits can match Capuçon’s feeling for Elgar’s nobilmente style.

[Rattle] takes the concerto firmly back into the 19th century, and when the soloist eventually enters, the generous space he allows himself for his initial phrases suggests that he shares that view of the work, too…Capuçon’s partnership with Stephen Hough is very much a true meeting of equals, with both contributing ideas to the interpretation; it’s a wonderfully flexible performance, with just the right sense of veiled nostalgia about it.