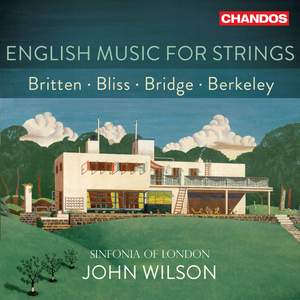 Here in [the Bridge Lament] is a prime example of the heartfelt precision and beauty of tone that typifies John Wilson’s Sinfonia of London. There’s plenty of heart, too, in their superlative... — BBC Music Magazine, March 2021, 4 out of 5 stars More…

Sinfonia of London and conductor John Wilson present their latest stunning album of music for string orchestra by Britten, Bridge, Berkeley, and Bliss.

During the 1930s, Bliss, Britten, and Berkeley all contributed major works to the repertoire for string orchestra, following in the footsteps of Elgar and Vaughan Williams. They are joined on this album by Frank Bridge whose Lament was composed during the First World War. This is the fourth recording by John Wilson with his award-winning Sinfonia of London. Bliss composed Music for Strings after he had completed the film score for Korda’s Things to Come, driven by his desire to compose a piece of ‘pure music’, expressing his own ideas rather than those of others. Commissioned in May 1937 by Boyd Neel for the Salzburg Festival that summer, Britten’s Variations on a Theme of Frank Bridge was composed at great speed, and helped to establish the young composer’s international reputation. Dedicated to his teacher, Frank Bridge, the theme is taken from the second of Bridge’s Three Idylls for string quartet. Lennox Berkeley composed his Serenade for Strings at Snape Maltings, where he was living with Britten in 1938 / 39. By the time of its completion the nation was at war and the music seems to reflect the composer’s anxious mood as the world faced an uncertain future. The album is recorded in Surround-Sound, and available as a hybrid SACD. The front cover features a painting by Edward Wadsworth of Bliss’s house, Pen Pits, built for him in 1935.

Here in [the Bridge Lament] is a prime example of the heartfelt precision and beauty of tone that typifies John Wilson’s Sinfonia of London. There’s plenty of heart, too, in their superlative treatment of Britten’s marvellous Bridge variations, warmly delivered even during the parody character pieces clustered together in the first half…Wilson’s team prove equally adroit in Berkeley’s Serenade.

The players may have changed [since Barbirolli] but the spirit has not. And the sound. Sumptuous is one word – but because this is Wilson that goes hand-in-hand with the keenest articulation. There’s a rosiny immediacy about it all, like being on the podium, or better yet inside the sound...Wilson’s way with strings has come a long way from Hollywood – but the lustre is inescapable.

Right from the determined opening bars of Britten's Variations on a Theme of Frank Bridge, it's clear that this is an exceptional album. There's a richness and sumptuousness to the string sound that is truly thrilling, not least in the lower strings...I can't recall many other ensembles who, like a flock of birds moving as one in the sky, are able to adapt and adjust so quickly and single-mindedly…I really can't fault it. Bliss, indeed…

Wilson’s handpicked band plays with a depth of sonority and variety of tone to challenge the greatest ensembles.

Forget any notions of wistful pastoral this title might suggest: English Music for Strings, performed by the Sinfonia of London, conducted by John Wilson, is a collection of works from the 1930s, with a sharp, modernist energy to match. Britten’s Variations on a Theme of Frank Bridge, with its poise, angularity and gleam, receives a virtuosic performance from this ace ensemble.